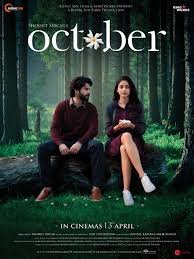 As per reports, Hemal Trivedi, a filmmaker and editor, has alleged on social media that the Varun Dhawan starrer ‘October’ is plagiarised from a Marathi film ‘Aarti – The Unknown Love Story’.

Trivedi posted on Facebook “Sircar has not just picked up the plot and the storyline, but has also blatantly copied the look and the moments from the original film”.

October is a romantic drama film which revolves around Dan (Varun Dhawan), a young hotel management trainee, who grows up when a sudden tragedy involving his batch mate Shiuli (Banita Sandhu) shakes him up completely.

Aarti – The Unknown Love Story is based on the true story of Sunny Pawar and Aarti Makawana, a couple who faced tragedy when an accident left Aarti immobile and with memory loss. Sunny took care of Aarti for four years till she passed away from a sudden attack of pneumonia in 2010.

Whether the underlying works of ‘October’ are plagiarized from that of ‘Aarti- The Unknown Love Story’ would be a subject matter to be ascertained. Indian Courts have often applied the tests laid down by the Supreme Court in  R.G. Anand vs Deluxe Films covered in my post here while determining such plagiarism cases.

Based on what the reports state, the similarities seem to be based on the doctrine of scenes a faire i.e. incidents, characters or settings which are as a practical matter indispensable or at least standard, in the treatment of a given topic.

There were reports earlier, that October is inspired from the Oscar nominated film ‘Her’.

COPYRIGHTABILITY OF A ‘BARE ACT’: THE NEED FOR A LEGISLATIVE SHIFT?