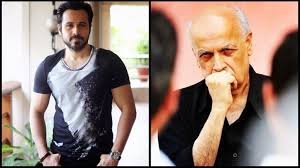 As reported by Mumbai Mirror, Delhi-based writer Dinesh Gautam and actor Imran Zahid have alleged that the script of the upcoming Emraan Hashmi film ‘Cheat India’, based on scams within the Indian education system, is a rip-off of their film, ‘Marksheet’.

The Writer-Actor duo have claimed that they had registered the script of ‘Marksheet’ with the Script Writers Association around November 2012 and have had lengthy discussions with veteran filmmaker Mahesh Bhatt on their script. They have further claimed that in June last year, Mahesh Bhatt presented a play titled Baat Niklegi Toh, written by Dinesh and featuring Imran, which opened in Delhi and Mumbai. During the time, the trio spent days brainstorming about Marksheet.

The duo has also filed an official complaint with the Writers Association. The report mentions the admission by the writers that the script may not have been copied verbatim, but the concepts and case studies used in the story are the same.

A top executive associated with the film has denied the allegations and mentioned that there are several films based on education system right from 3 Idiots, Chalk N Duster to Aarakshan and that widely reported cases like the Vyapam scam of 2013 in Madhya Pradesh which involved politicians, senior and junior bureaucrats and businessmen are in the public domain. Further that no one can claim exclusivity or any copyright on case studies available on Google and Wikipedia and anyone can make a film on any scam in the education system.

On a preliminary reading of the reports, there seem to be two claims here (i) copyright infringement of underlying works (ii) breach of confidentiality.

As far as copyright infringement is concerned, the principles laid down in the Supreme Court’s landmark case of R.G. Anand vs Deluxe Films have time and again been relied upon by the Indian courts i.e.

(i)There can be no copyright in an idea, subject matter, themes, plots or historical or legendary facts and violation of the copyright in such cases is confined to the form, manner and arrangement and expression of the idea by the author of the copy-righted work.

(ii) Where the same idea is being developed in a different manner, it is manifest that the source being common, similarities are bound to occur. In such a case the courts should determine whether or not the similarities are on fundamental            or substantial aspects of the mode of expression adopted in the copyrighted work. If the defendant’s work is nothing but a literal imitation of the copyrighted work with some variations here and there it would amount to violation of the copyright. In other words, in order to be actionable the copy must be a substantial and material one which at once leads to the conclusion that the defendant is guilty of an act of piracy.

(iii) One of the surest and the safest test to determine whether or not there has been a violation of copyright is to see if the reader, spectator or the viewer after having read or seen both the works is clearly of the opinion and gets an unmistakable impression that the subsequent work appears to be a copy of the original.

(iv) Where the theme is the same but is presented and treated differently so that the subsequent work becomes a completely new work, no question of violation of copyright arises.

(vi) As a violation of copyright amounts to an act of piracy it must be proved by clear and cogent evidence after applying the various tests laid down by decided cases.

(vii)Where however the question is of the violation of the copyright of a stage play by a film producer or a Director the task of the plaintiff becomes more difficult to prove piracy. It is manifest that unlike a stage play a film has a much broader prospective, wider field and a bigger background where the defendants can by introducing a variety of incidents give a colour and complexion different from the manner in which the copyrighted work has expressed the Idea. Even so, if the viewer after seeing the film gets a totality of impression  that the film is  by and large a copy of the original play,     violation of the copyright may be said to be proved.

As per what has been stated in the reports, the concerned executive of the film ‘Cheat India’ seems to be referring to the doctrine of scenes a faire i.e. incidents, characters or settings which are as a practical matter indispensable or at least standard, in the treatment of a given topic.

The United States District Court had relied on the doctrine of Scenes A faire in the case of Livia Milano vs. NBC Universal Inc which stated “Elements of expression that are not protectable under the Copyright Law include general plots which are scenes that flow naturally from unprotectable basic plot premises and remain forever the common property of artistic mankind.”

Whether the underlying works of ‘Cheat India’ are plagiarized from that of ‘Marksheet’ would be a subject matter to be ascertained applying the above tests. However, if the writer-actor duo can prove a breach of confidentiality, they would have a much stronger case. As mentioned in my post here, there are several judicial precedents which have held that that protection of confidence is a broader right than the proprietary right of a copyright. In the case of Beyond Dreams Entertainment Pvt. Ltd & Ors V/s Zee Entertainment Enterprises Ltd & Anr, the Bombay High Court had held that “Whereas there can be no copyright in an idea or information per se, if the idea or information has been sufficiently formed and has been acquired by a person under such circumstances that it would be a breach of good faith to publish or use the same without authority from the person from whom it has been so acquired, the Court may in an appropriate case protect the idea or information by granting an injunction. The two rights naturally have different incidents. Whereas the copyright is good against the world at large, sharing of confidence casts a duty only on the recipient of the information or idea to maintain confidentiality and not publish or use the same without the authority of the originator”.

There are several precedents where courts have granted injunction on claims of breach of confidentiality. Few examples being Jannat 2, Phir Se, Shubh Vivah. A list of such orders can be viewed at the Judgement section here.