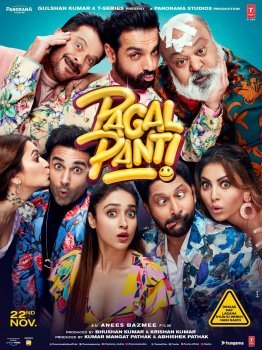 Writer-Director Mr. Anees Bazmee (“Plaintiff”), moved the Bombay High Court against Panorama Studio Pvt. Ltd, T Series, Hotstar amongst others for recovery of a sum of INR.1,08,00,000/- towards his dues for his services rendered as the writer and director of the film  “PagalPanti’ (Film) produced by Panorama Studio Pvt Ltd. & Ors. Read order here.

The Plaintiff contended that as per his agreement with Panorama Studio Pvt. Ltd (“Defendant No.1”), the said defendant had agreed to create a lien and charge on the 50% share of intellectual property rights in the Film in favour of Mr. Bazmee till the time the total consideration amount of INR.1,08,00,000/-  was fully paid to Mr. Bazmee.

Bazmee further contended that the production house had given him a postdated cheque worth INR.1,08,00,000/-  but the same got dishonored since the “account was blocked.”. The Counsel appearing on behalf of the Defendant No. 1 stated that account got blocked because Yes Bank, on whom the cheque was drawn was in a moratorium. Justice Shriram noted that except for the counsel’s statement, there was nothing else to record and further took note of the contention of the production house that the film Pagalpanti did not work well in the box office and that the production house suffered a loss of about Rs 20 crores.

Justice Shriram noted that, admittedly Defendant no.1 owes Rs.1,08,00,000/- to plaintiff. On 17-8-2020 and 20-8-2020, Defendant no.1 appeared through counsel but has not filed affidavit even opposing the interim application, whereas other two defendants have filed. The only prima facie conclusion I can arrive at is defendant no.1 has no defence, otherwise would have filed an affidavit in the last two weeks. Even from the submissions from Mr. Purohit, except for stating that there are no averments in the plaint for an attachment before judgment, no other defence as to Defendant no.1’s liability, was raised.

The bench noted that the production house had agreed to create a lien and charge on the 50% share of Intellectual Property Rights in the film Pagalpanti in favour of plaintiff, till the amount of INR.1,08,00,000/- was fully paid to Plaintiff. In furtherance to this, Justice Shriram directed defendant no.1 to deposit in court all present and future revenues earned from exploitation of the said through on any and all modes, media and format in any manner whatsoever such as theatrical rights, DTH, Home viewing rights, satellite rights, internet rights, rights arising under any other media DVDs, Blueray or any other formats, and provided Defendant no.1 a period of 60 days’ time to file written statement instead of 30 days provided in the Civil Procedure Code.