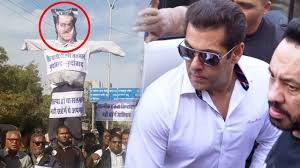 According to reports, an FIR was filed in Jodhpur district on March 5, by a 42-year-old Naresh Kandara against Salman Khan and Shilpa Shetty for allegedly using ‘Bhangi’ word in a derogatory way and hurting the sentiments of Valmiki community. Salman Khan allegedly made the derogatory remark during the promotions of his last release Tiger Zinda Hai in December 2017.

A similar case was lodged against Salman and Shilpa in Rajasthan’s Churu district last year. However, the high court had vide order dated February 26, 2018 stayed further proceedings in connection with that FIR [Read order here].

In December last year, a complaint was also registered against the actors in connection with the matter, in Mumbai. The National Commission for Scheduled Castes (NCSC) had also sought replies from the Information and Broadcasting Ministry and the police commissioners of Delhi and Mumbai over the issue after it received a complaint from an ex-chairman of the Delhi Commission for Safai Karamcharis, Harnam Singh.