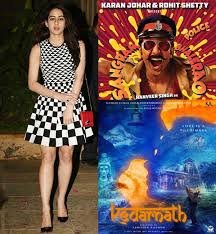 Abhishek Kapoor’s ‘Guy in the Sky Pictures Pvt. Ltd’ has filed a suit before the Bombay High Court against Sara Ali Khan, Kwan Entertainment and Madhu Mantena over breach of contract by Sara Ali Khan alleging that Sara gave dates locked for his film ‘Kedarnath’ to Rohit Shetty for the film ‘Simmba’.

The matter was listed on May 25 before the vacation bench of Justice S J Kathawalla who heard the producer’s counsel Hitesh Jain who pleaded urgency.

As per reports, Kwan Entertainment and Madhu Mantena have been made parties to the suit since they are the talent management agency representing Sara Ali Khan, to restrain her from working for ‘ Simmba’ as she had already committed dates to her debut film ‘ Kedarnath’ until July 15. Guy In The Sky Productions Pvt Ltd also wants the court to direct Sara to complete her first commitment first and demanded ₹ 5 crore as damages. The question being raised in court is whether an actor can change dates already given and give them for another movie. The producer has claimed that Sara Ali Khan had agreed to be available for shoot but when informed last month that the shoot would continue through May till July 5, her agent said she would not be available in June since she has to go for another film, which according to the suit is a “breach” of the agreement.

Spotboye reports that Ronnie Screwvala had offered the makers of Simmba that Sara’s portions in Kedarnath would be wrapped up by June 30 and then she could start shooting with them from July onwards. Advocate Hitesh Jain has been reported to say “Kedarnath shoot is in Mumbai, while Simmba is out of town. Sara had given the dates till 15 July. What is the sanctity of such contracts then?” Reportedly, Justice Kathawala also asked the parties as to what is the problem if Sara shoots for Simmba in July since the film’s shooting has not yet begun.

Kedarnath shoot had been delayed due to the financial woes the film was facing until Ronnie Screwala took over the project. It is therefore not clear as to whether Sara Ali Khan’s agreement with the previous producers stipulated that she would be required to shoot for the film till its completion despite the change in the shooting schedule or whether the contract originally blocked her dates until July 15 as has been reported.

This would be an interesting case. It is a settled law that contracts of personal service are not specifically enforceable. However, negative covenants in the agreement can be enforced during the term of the agreement. If Sara’s contract has negative covenants restricting her from taking up any other film during the shooting schedule of Kedarnath, then the same may be enforceable. However, the facts and circumstances of the case would be considered by the court while determining breach of contract and the damages claimed. In the instant case, it appears that the shooting of Kedarnath has commenced and is at an advanced stage towards completion, whereas the shooting of Simmba has not yet commenced. However, Simmba stars an A-lister actor Ranveer Singh and the shooting schedule of the film would have been made as per his dates, which may be difficult for the producers to change.