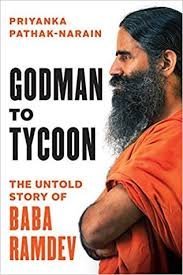 As per reports, in an appeal filed by Baba Ramdev before the Delhi High Court, the Court on May 10, issued an interim order restoring the ban on publication and sale of a book purportedly on his life, which he claimed contained defamatory content.

The court stayed an order of the Additional Senior Civil Judge (ASCJ) which had removed the ban on the publication and sale of the book titled ‘Godman to Tycoon’, allegedly based on the life of the yoga guru.

“I am going to restore the order of the trial judge. You (author and publisher of book) file your reply,” Justice R K Gauba orally said referring to the initial order passed by additional civil judge (ACJ) banning the book.

The high court mentioned that a detailed order would be passed in the matter later.

The book was published in July last year and authored by journalist Priyanka Pathak Narain.

In August last year, the ACJ had restrained publisher Juggernaut Books from publishing and selling the book titled ‘Godman To Tycoon’ till further orders. It had also restrained Amazon India and Flipkart Internet Pvt Ltd from selling the book online and said any pending delivery of the book to buyers be stopped immediately.

However, after hearing the appeal of the author and the publisher, the Additional Senior Civil Judge vacated the injunction in April, this year.

Advocate Siddharth Aggarwal, appearing for the author of the book in the high court, said that at the end of the book, there are extracts of the facts including the details of persons whom she had interviewed before writing the book.

The counsel said the persons who were interviewed include Ramdev and what all he had said were there in different chapters of the book.

Advocates Raj Shekhar Rao and Satyajit Sarna, who represented the publisher, said the extracts of the material in the book were already in public domain since 2007 and Ramdev never raised any objection. The counsel said the entire record of the trial court has not been placed before the high court.

Baba Ramdev has challenged a civil judge’s April 28 order by which the court had lifted the ban on the book by setting aside the injunction order of the trial court in August last year.

Baba Ramdev, in his suit, had alleged that the information in the book was false, tended to injure his reputation and led to an inference that the yoga guru had been involved in mischievous and criminal activities to achieve fame and success.

Besides seeking a declaration that certain portions of the book are objectionable and derogatory, Baba Ramdev also sought an injunction to restrain the author and the publisher from publishing, selling and distributing the book.

The publisher had earlier said that the book was a work of serious journalism. It was the product of over fifty interviews, many of them taped, with Ramdev and key players in his life, including close aides and family members, it had said.

“The book contains a detailed 25-page note on sources that lists the interviews, articles, police reports and RTI replies that are the basis of each chapter,” it had said in a statement.

The Single Judge Bench of Justice RK Gauba observed that prima facie, the contents of the book to which exception is taken, do seem to carry insinuations which are likely to harm the reputation of the petitioner (Baba Ramdev).

The Court while granting a temporary injunction against the book, stated that if such a protection is not granted, it would have the potential of resulting in irreparable loss of reputation of the petitioner.