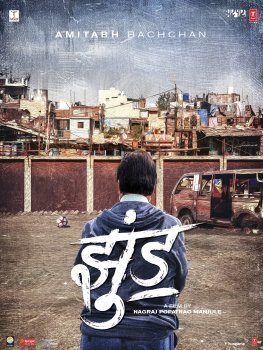 Amitabh Bachchan Starer Jhund is facing trouble as a law suit has been filed for stalling its release. The case has been filed in a civil court of Additional District Judge Ranga Reddy at Miyapur, Telangana and is set to be heard on 28th May. The movie which was supposed to release on 8th May 2020 but was postponed due to the current situation in the country and worldwide, allegedly is a story of Vijay Barse and Akhilesh Prakash Paul. Vijay Barse is a retired sports teacher who founded an NGO called Slum Soccer. He managed to rehabilitate street kids by keeping them off drugs and crime by turning them into soccer players and building a whole team. The movie also portrays the Akhilesh Prakash Paul without whom the story of Vijay Barse would be incomplete. Akhilesh was a student of Vijay Barse and due to his guidance was able to turn his life around from being a gangster to a soccer player who went on to represent India as a captain in the Homeless World Cup in 2009. The movie is directed by Nagraj Manjule, casts Amitabh Bachchan, Vicky Kadian and Ganesh Deshmukh and is produced by T-Series.

The petition was filed by Nandi Chinni Kumar, an independent Film maker from Hyderabad, who alleges copyright infringement and claims to have entered into an agreement with Akhilesh Kumar Paul to make a biopic on his life story and had also registered his script with the Telangana film writers association with a title Slum Soccer on June 11, 2018. The movie was supposed to go on floors in the second half of 2018 but to due reasons unknown it could not go as scheduled. As per a press reports from 2018, the Hyderabad based filmmaker acquired the rights to make a film about Akhilesh Paul in Hollywood and Bollywood.

Before filing the petition, Nandi Kumar had also sent legal notices in 2019 to the makers of the movie ‘Jhund’ for copyright infringement but only got a ‘vague reply’ as claimed. This is not the first time that a biopic project has been put on halt due to the discrepancy in ownership of rights. Most recently, Madhubala’s Biopic by Imtiaz Ali was put on Hold after one of her sister’s refused to give a No Objection Certificate for the life rights of Madhubala. A Delhi Court also recently stayed the makers of upcoming Bollywood film ‘Chanda: A Signature that Ruined a Career’ from screening, exhibiting or marketing till further orders. The movie was allegedly based on the life of former ICICI Bank CEO Chanda Kochhar who claimed the movie to be defamatory and that no consent was given by her to make a movie on her life. Personality Right laws are still at a nascent stage and are developing with each passing judgement. We’ll be looking forward to what goes around in this case.