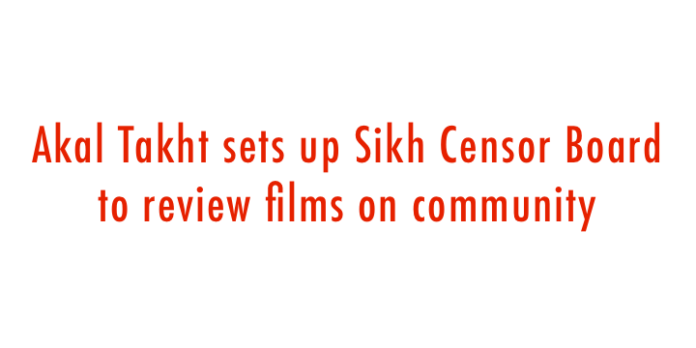 As per reports, the Akal Takht, the supreme temporal seat of the Sikhs today constituted a 21-member Sikh Censor Board to clear movies relating to Sikh religion.

Akal Takht has stated that permission of this board will be mandatory for the script for every filmmaker before making a film related to Sikh religion. The Akal Takht would give final approval to the movie on the recommendation of this panel.

Dr Roop Singh Chief Secretary of SGPC said, “the Akal Takht has constituted  the Sikh censor board, as the CBFC does not adhere to values and ethics of Sikh community not they take any Sikh representative as their member.” When asked is it legally tenable, he said, “we will not allow any movie to be released which has anything to do with Sikhs till it is cleared by our board.”

“I welcome the formation of this board, it would ensure that standard norms are worked which could possibly be applied for such matters. Legally it (Akal Takht) cannot intervene in the movies as there is CBFC, but it will have a positive effect as it would work out parameters which it expects from films producers and which film makers should adhere too. Now what is happening that the SGPC is in a conflict with film makers on film to film basis and thus it’s yard stick varies,’’ says Kuldeep Singh a political analyst.

Based on what the reports have mentioned, this Sikh Censor Board does not seem to have any statutory sanction. If challenged by the producers, it will be held unconstitutional. The CBFC is the statutory body to certify films and such a parallel censor board certainly would not be held legally tenable.

As captured in my post here, the latest controversy erupted last month over the film Nanak Shah Fakir as it portrays the life of Guru Nanak Dev founder of Sikh religion.

In last few years the other movies which have run in trouble with the Akal Takht and SGPC include an animated historical film on the sacrifices of the sons of the tenth Sikh Guru Gobind Singh `Chaar Sahibzaade’ produced in 2014.