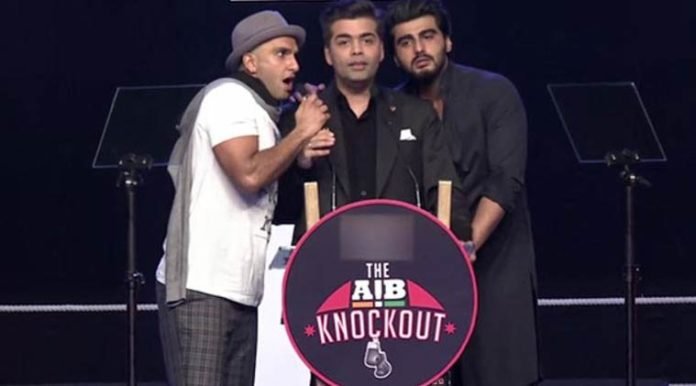 As per reports, the Bombay High Court on April 3, 2018 once again declined to grant any interim relief to Ranveer Singh and Arjun Kapoor over an FIR filed against them and other film personalities for using “obscene” and “abusive” language during a comedy event ‘AIB Knockout’ in 2015.

On March 13 last month, the Court had declined the interim relief to the actors on the ground that it will consider the prayer only after the complainant was provided a copy of the petition, and scheduled the matter for further hearing on April 3.

A bench of Justices R M Savant and Sarang Kotwal directed the actors’ lawyer to seek the assent of the Acting Chief Justice V K Tahilramani’s court for the matter to be heard along with two other related pleas.

One of these two pleas were filed by comedian Rohan Joshi of AIB, seeking that a related FIR against him be quashed. The other plea is a Public Interest Litigation (PIL) filed by a law teacher. The PIL seeks action against the organisers and participants of the show, and also urges the HC to direct the state authorities to issue guidelines to monitor such programmes on YouTube and similar video networks.

The actors, meanwhile, urged the court to direct, by way of an interim relief, the Pune and Mumbai police to refrain from taking any coercive action against them. The bench, however, said it will consider the prayer once all the three pleas were tagged together and assigned for further hearing by the Acting CJI’s court.

In February 2015, a Mumbai court had ordered the police to file FIRs against Arjun Kapoor, Ranveer Singh, filmmaker Karan Johar, comedy group AIB and actresses Alia Bhatt and Deepika Padukone amongst others for obscenity. All of them participated, either in an active or a passive capacity, in the AIB Roast. The FIR was filed against them for allegedly using obscene and abusive language during the comedy event AIB Knockout

On December 20, 2014, Singh and Kapoor, along with 10 other celebrities, including Karan Johar, Deepika Padukone, and members of the AIB team, had performed at a charity event in Worli, Mumbai. The video of the event was uploaded on YouTube a year later and it went viral. In February 2015, Dundkar filed a complaint with the chief metropolitan magistrate of Girgaon court, alleging that the show was “vulgar, obscene…pornographic.”

Quashing petition was filed by the aforementioned celebrities before the Bombay High Court. Interim stay order was granted to Karan Johar in one such petition on Feb 20, 2015 [Read order here].