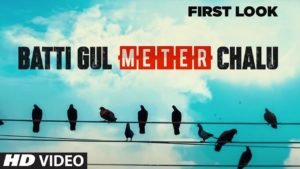 On Tuesday, 17th July 2018, the Delhi High Court vide an order secured the commercial interest of Gothic Entertainment in the film “Batti Gul Meter Chalu” (“Film”), whilst restraining them from interfering with the commercial exploitation of the Film in any manner whatsoever.

This order (yet to be uploaded) was passed as an ad-interim arrangement pending final disposal of the application filed by M/s Gothic Entertainment seeking an injunction in respect of the Film.

A brief background of the matter is as follows:

It is alleged by T-Series that it had purchased 50% of the rights in the Film vide agreement dated 28th July 2017 and remaining 50% of the Film rights were also eventually transferred to T-Series by Kriarj vide a letter dated 19th April 2018. T-Series further alleged that Kriarj no longer owns any rights in the Film and it has the complete control over the production, distribution and release of the Film.

Interestingly, Gothic Entertainment has already approached the Bombay High Court against Kriarj under Section 9 of the Arbitration & Conciliation Act, 1996 claiming similar reliefs including the Credit Rights and deposit of Gothic’s Interest in Revenues in an escrow account. In the said arbitration proceedings filed before the Bombay High Court, vide order dated 22nd May 2018, a sole arbitrator has been appointed and Gothic Entertainment has already moved an application seeking interim relief under Section 17 of the Arbitration & Conciliation Act, 1996.

In the present matter, the Counsel appearing for M/s Kriarj brought the Court’s attention to the pending arbitration proceedings between Gothic Entertainment and Kriarj arising out of the same cause of action and claiming similar reliefs. The Counsel submitted that in view of the same, the present suit was not maintainable against Kriarj.

Upon consideration of all the facts, submissions and materials on record, the Court observed that T-Series owned 50% of the rights in the Film prior to the Gothic Agreement; however the remaining 50% of the Film rights had been allegedly acquired by T-Series subsequently to the Gothic Agreements by way of a letter, whose transaction terms were not clear. In view of the same, the Court noted that the said transaction could not prima facie give T-Series unencumbered rights in the Film and rights of Gothic and its investment in the Film could not be ignored by T-Series and Kriarj as Kriarj had complete knowledge of the same.

The Court observed that although Kriarj does not have any control over the Film, it still continues to enjoy control on the credits in the Film. Thus, as far as the Credit Rights are concerned, the Court directed Gothic Entertainment to avail of its remedies against Kriarj under Section 17 of the Arbitration & Conciliation Act, 1996 before the learned sole arbitration appointed by the Bombay High Court.

As far as Gothic’s Interest in Revenues is concerned, the Court observed that since the remaining 50% of the Film rights were acquired by T-Series after the execution of the Gothic Agreements and there being no privity of contract between T-Series (who claims to control 100% rights in the Film) and Gothic Entertainment, it was imperative to secure Gothic’s Interest in Revenues.

The Court held that a prima facie case is made out in favour of Gothic Entertainment and directed T-Series to render complete accounts to the Court and deposit Gothic’s Interest in Revenues with the Registrar General of the Court on a weekly basis, commencing from the release of the Film.

Lastly, upon submission by the Counsel appearing for T-Series that since Gothic’s Interest in Revenues has been secured by the Court, Gothic Entertainment should not be permitted to interfere with the production, distribution and release of the Film, the Court ordered accordingly.

Meanwhile, Vashu Bhagnani of Pooja Entertainment and Films Limited (“Pooja Entertainment”) continues his legal battle with the makers of Batti Gul Meter Chalu and Fanney Khan. As previously reported, the Delhi Court vide an order dated 10th July 2018 granted an interim injunction restraining Pooja Entertainment from interfering with the distribution and release of the said films, co-produced by T-Series. The suit was filed by T-Series pursuant to certain public notices issued by Vashu Bhagnani (as reported here) claiming that he owned the all-India theatrical rights in respect of the said films and asking theatre owners not to enter into any agreements to release these films.

As per recent reports, Vashu Bhagnani has now approached the Bombay High Court against the makers of the said films based on the same cause of action. Reportedly, Justice Kathawalla has kept the hearing of the matter on 19th July 2018 and asked Pooja Entertainment to seek clarity from the Delhi High Court regarding the ex-parte order dated 10th July 2018 on the next hearing.

As per our sources, at the next hearing before the Delhi High Court on 17th July 2018, Pooja Entertainment sought an oral clarification from the Court to maintain the suit in the Bombay High Court. The Court declined the same and directed that the injunction would remain in force till the next date of hearing. The Parties were directed to complete the pleadings in a week and the next hearing is kept on 26th July 2018. This order is yet to be uploaded.