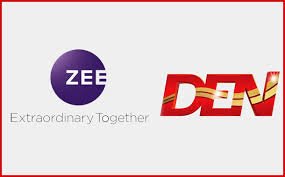 As per reports, Zee Entertainment Enterprises Ltd has complained to the Ministry of Information & Broadcasting alleging violation of extant DAS Regulations and breach of licence conditions by DEN Networks Ltd.

Zee has alleged that that DEN is supplying signals in an unencrypted and non-addressable mode in DAS notified areas, which is contrary to the licensing conditions and violation of DAS Regulations.

In addition, ZEE has also submitted video recordings to MIB as an evidence to show that DEN is taking channels from a DTH Set Top Box and re-transmitting the channels through its cable networks in an unencrypted and non-addressable mode. ZEE has stated that this amounts to piracy of channels which is not only an offence under the Copyright Act, 1957, but also specifically prohibited under the Programme Code as provided in the Cable Television Network Rules, 1994.

The complaint alleged that the actions of DEN are not only adversely impacting the broadcasters but also causing revenue loss to the public exchequer.

In January, TDSAT had ordered Den Networks Ltd to continue telecasting ZEE channels as per the agreement which expired on December 31, 2017. It also ordered DEN to pay ₹10 crore fine to ZEE.

DEN Networks and ZEE Entertainment were in TDSAT due to non-renewal of their commercial arrangement which expired on December 31, 2017.