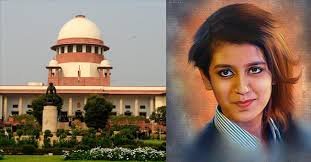 The bench first asked the counsel for the petitioners as to why they did not approach the high court first, to which the petitioners’ counsel informed the court about the multiple proceedings in different high courts.

The bench then directed that no police complaint / or complaint under Section 200 of the CrPc be entertained against the petitioners in any other state solely on the basis of the promotional video of the song ‘Manikya Malaraya Poovi’ in the film ‘Oru Adaar Love’.

The petitioners had approached the Supreme Court seeking quashing of the FIR registered in the state of Telangana and criminal complaints in Maharashtra by Raza Academy and group of persons under the aegis of Jan Jagran Samiti for allegedly hurting the religious sentiments of Muslims.

FIR was first lodged against the actress and the filmmakers at Falaknuma police station in Hyderabad. The FIR alleged that the song had hurt the religious sentiments of Muslims. Two more FIRs – one by the secretary of Raza Academy with Mumbai Police and another by Janjagran Samithi at Jinsi police station in Maharashtra’s Aurangabad forced Priya Prakash Varrier, director Omar Abdul Wahab and producer Joseph Valakuzhy Eapen to move the apex court.

The plea filed by Prakash Varrier claimed that the song has been misunderstood by the people residing outside Kerala, as the translation was taken out of context, resulting in the multiple criminal cases being registered against the petitioners.