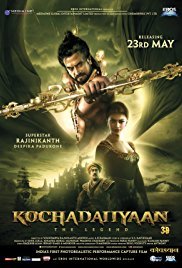 The court also ordered Mediaone to pay back the interest for the Rs 10 crore loan it took from Ad-Bureau. Further, failure to repay the amount on time would hold Latha Rajnikanth, who is Mediaone’s director, liable to personally settle the amount, the court stated.

Ad Bureau reportedly loaned Media One, which produced the film ‘ Kochadaiyaan ‘, Rs 10 crore in April 2014, when the Rs 150-crore film was facing a funds crunch for post-production work. Rajinikanth’s wife signed as a guarantor for the loan. Ad Bureau claimed that Media One still owed it Rs 6.2 crore.

Kochadaiiyaan, which released in 2014, was a box-office debacle.

Ad-Bureau moved the SC two years later alleging that Latha had not repaid Rs 6.2 crore to them.