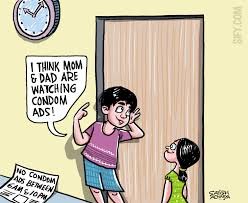 The Rajasthan High Court, Jodhpur bench has dismissed a plea filed by NGO ‘Global Alliance for Human Rights’ against the I&B Ministry’s order allowing airing of condom advertisements only after 10 pm and rebuked the petitioner for “proxy litigation”, observing that the “obscene” ads were only aimed at promoting condoms as ‘instruments of pleasure’ and not for contraceptive use. The Court dismissed the petition, holding that the advisory issued to regulate the telecast of advertisement of condoms was well within the purview of the I&B Ministry. Read order here.

The counsel for the petitioner, Prateek Kasliwal, contended that the order of the I & B Ministry is a restriction on the business of the Condom industry and will have a deteriorating effect on the awareness mission of the NGO which is working to combat AIDS.

The bench comprising of Justices Gopal Kishan Vyas and G.R. Mollchandani observed “This country has grown from 45 crore population post-Independence to over 1.3 billion as of now. Where were you and the Condom campaign to prevent population explosion?”

“You are not concerned with use of Condom as contraceptive but for preventing STDs (sexually transmitted diseases). We fail to understand what’s wrong if the obscene advertisements in the name of condoms are regulated and allowed only between 10 PM to 6 AM,” it said.

The bench came down heavily on the NGO saying, “you are not espousing your cause but cause of someone else. We don’t appreciate proxy litigation.”

The Court further remarked that the advertisements were so obscene that one cannot watch them in Indian social structure with family. “What to say about (the contention of) giving a message for using Condom as contraceptive. Companies are promoting it (condom) as pleasure instruments,” the court said.

The I&B Ministry had on December 11, 2017 issued a circular asking TV channels not to telecast advertisements of condoms between 6 am and 10 pm. The Ministry later clarified that the said advisory only pertains to sexually explicit content being used to market certain condom brands which titillate the audience from a PR perspective. Advertisements that do not sexually objectify women and are aimed at informing citizens regarding devices/products/medical interventions to ensure safe sex are not covered under the said advisory. The clarification came post Rajasthan High Court issuing notice to the central government on the aforementioned petition filed by Global Alliance for Human Rights challenging the advisory banning condom advertisements on television during day hours.

The Ministry had referred to Rule 7 (7) of the Cable Television Networks Rules 1994, which says, “No advertisement which endangers the safety of children or create in them any interest in unhealthy practices or shows them begging or in an undignified or indecent manner shall not be carried in the cable service”.

It had also cited Rule 7 (8) which states that “indecent, vulgar, suggestive, repulsive or offensive themes or treatment shall be avoided in all advertisements”.