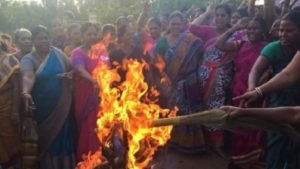 As per reports, a police complaint has been filed against RGV by BJP Mahila morcha leaders before the Surya Rao Peta Police Station, Vijaywada demanding a ban on his next film ‘God Sex and Truth’.

According to a media report, the complaint states that such films go against women and damage careers of the youth, thus demanding a ban on the film since it ‘damages the Indian marriage system’.