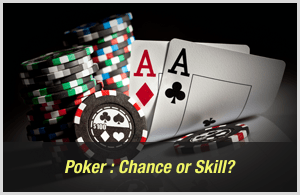 A petition has been filed by Nasir Patel before the Bombay High Court seeking clarification on whether Poker is a game of skill or game of chance.

As per reports, the petition was filed after the police raided an apartment in Goregaon and booked 29 persons, for playing a game of poker, under various sections of the Maharashtra Prevention of Gambling Act, 1887.

A division bench of Justice R M Sawant and Justice Sandeep Shinde by way of interim relief, restrained the police from filing a charge sheet in the case registered by them in 2016 until the next date of hearing which is January 30, 2018. [Read order here]

The Petitioner has contended that the Karnataka High Court and other High Courts of India have clearly held that poker is a game of skill and if the same is played without flouting any norms in accordance with law, it’s not an offense. The petitioner has also contended that there is no prima facie case to establish as to how a card game of Poker, being played among friends, within the four boundaries at a private place could be a gamble, until the same is not prohibited by any law. Accordingly, the FIR be quashed and set aside.

According to the police, on receipt of a tip-off that some people were gambling, in an apartment, a raid was conducted and they found that two tables with eight chairs surrounding them, were placed and people were using coins to play the game of poker. It is alleged that Nasir Patel, when questioned said that he was the cashier and also operating the gambling den. Accordingly, police had arrested 29 people, but the magistrate had soon granted them bail.

The petition claims that police failed to consider that no gamble was being done, but it was a private entertainment party with friends and Poker was being played for entertainment purposes only.

Further, the police failed to consider that no license is required to play Poker within private premises for entertainment and recreational purposes.

“6. Having already taken note of the fact that in respect of the game of poker if played as a game of skill, license is not contemplated and further keeping in view the fact that permission in this case has been obtained in that regard, certainly, the petitioner would be entitled to conduct such games, provided, the same is in accordance with law. However, it is to be clarified that, if the respondents have any definite information with regard to the illegal activities, only in such event, the respondents would be entitled to take action in accordance with law and the same shall not ordinarily be indulged in, to prevent the lawful activities of the petitioner.”

Further, in the case of Shri Kizhakke Naduvath Suresh, Indian Poker Association v/s The State of West Bengal & Ors [W. P. No. 13728 (W) OF 2015], the Calcutta High Court had held that “Provisions of the West Bengal Gambling and Prize Competitions Act, 1957 and in particular the definition of “gaming or gambling” under section 2(1) (b) thereof reveal that poker is not included either in gaming or gambling and, therefore, if anyone indulges in playing such game without indulging in any other overt act, which could be treated as amounting to an offence, the same does not attract police interference. It is accordingly directed that playing the game of poker shall not result in unnecessary harassment of the players by the respondents.”

Another appeal filed by Indian Poker Association before the Gujarat High Court on legality of Poker is listed for Feb 6, 2018. The appeal has been filed against the order passed by Justice Rajesh H Shukla that ruled poker to be a game of chance and an activity falling under the definition of gambling.