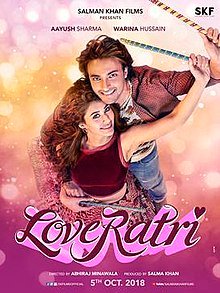 As per reports, in a complaint filed by Advocate Sudhir Kumar Ojha alleging that the title and contents of the film ‘Loveratri’ hurt the religious sentiments of Hindus, the sub-divisional Sub Divisional Judicial Magistrate (East) Shailendra Rai has directed the Mithanpura police station in Muzaffarpur , Bihar to lodge an FIR, based on a complaint.

Reportedly, the Complaint has been filed against Salman Khan (producer of the film), its directors and actors. Sudhir Kumar Ojha has claimed that he has watched the promos of the film and they contained a lot of vulgarity. He has further alleged that the title of Loveratri hurts religious sentiments of Hindus by ridiculing the festival of Navratri and promoting vulgarity. In his complaint, Ojha had also pleaded that the name of the film Loveratri, which is scheduled to hit the theatres on October 5, denigrates Goddess Durga.

The complaint was lodged before the court last week under Indian Penal Code-sections 295 (injuring or defiling place of worship with intent to insult the religion of any class), 298 (uttering words etc. with deliberate intent to wound the religious feelings of any person), 153 (wantonly giving provocation with intent to cause riot) 153B (imputations, assertions prejudicial to national integrity) and 120B (criminal conspiracy).

This is however, not the first time Mr. Ojha’s religious sentiments have been hurt.  As per this report, Sudhir Kumar Ojha has filed over 503 cases many of them involving celebrities such as Shah Rukh Khan, Gauri Khan, Salman Khan, Arvind Kejriwal, Anna Hazare, Salman Khan, Sushilkumar Shinde, Katrina Kaif, Vidya Balan and a host of others.

Some of the film related issues where Mr. Ojha’s religious sentiments were hurt include:

Loveratri seems to have been embroiled in controversy. Earlier this month, a writ petition was filed by an advocate Ajaykumar Shankarrao Waghmare before the Aurangabad bench of the Bombay High Court against the movie “Loveratri” alleging that the film distorts the festival ‘Navratri’ and is derogatory to all women. Few weeks back, the Vishva Hindu Parishad (VHP) had said that it wouldn’t allow screening of the movie as it might hurt the sentiments of Hindus.

As mentioned in my post here, targeting cinema for ulterior motives has become a frustrating trend. While our judiciary has so far (largely) not entertained such frivolous cases, it hurts to witness the traumatic experience film makers are put through when frivolous Sec 295A IPC cases and public interest litigations are filed mostly as publicity stunts.

The Supreme Court had taken note of this disturbing trend in its judgment dated April 20, 2017 in  Mahendra Singh Dhoni vs. Yerraguntla Dhyamsundar & Anr and  held that “it is as clear as crystal that Section 295A does not stipulate everything to be penalized and any and every act would tantamount to insult or attempt to insult the religion or the religious beliefs of class of citizens. It penalizes only those acts of insults to or those varieties of attempts to insult the religion or religious belief of a class of citizens which are perpetrated with the deliberate and malicious intention of outraging the religious feelings of that class of citizens. Insults to religion offered unwittingly or carelessly or without any deliberate or malicious intention to outrage the religious feelings of that class do not come within the section.”

It is important that such complaints are discouraged and the criminal machinery is not misused by complainants.