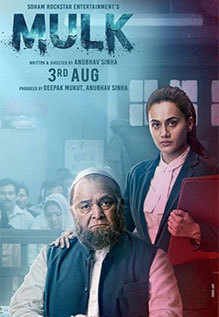 As per reports, Dindoshi sessions court in Mumbai has granted an interim stay on the release of Rishi Kapoor and Taapsee Pannu starrer ‘Mulk’.  The film is scheduled to release on August 3.

Reportedly, the court was hearing an application filed by one Vandana Punwani, who is embroiled in a property rent dues dispute with the production house ‘Benaras Media Works Limited’ which is producing the film. She has claimed that the Benaras Media Works Limited has links with the movie and hence the release of the film should be stayed till the dispute was resolved.

According to the complainant, Beneras Media Works Limited had taken on rent Punwani’s bungalow in the city and had wanted to convert it into an office space. However, when it did not get the requisite permission from the civic body to convert the residential property into a commercial one, the company refused to pay rent to Punwani.

Following this, in 2016, Punwani approached the Dindoshi sessions court seeking to recover rent which she claims is around Rs 50 lakh. The reports state that Punwani filed an application asking the court to stay the release of movie ‘Mulk’ till the dispute is resolved.

Additional sessions Judge M H Shaikh on July 31, granted an interim stay on the release of the movie and posted the application for further hearing on August 2. The lawyer representing the director of the film ‘Anubhav Sinha’ has been reported to state “Punwani in her application has made false claims that the Benaras Media Works has links with Mulk director Anubhav Sinha. These are not true. We are yet to receive the court’s order staying the release. But tomorrow we will either seek clarification from the same court or approach the Bombay High Court,”.

While reacting to the development Anubhav Sinha denied being served with the order and stated that “if someone has mischievously misled the court and if the court has really passed such an order we shall move a petition to vacate the same. Logistically all arrangements are in place to release the film on August 3,”.

Based on the facts stated in media reports, it seems absurd that the court would restrain the film’s release for an unrelated money claim. In all likelihood such an order would be overruled in appeal if the stay is not vacated on the next date of hearing.

Update: As per reports, the presenters of the film, Deepak Mukut and his company Soham Rockstar Entertainment, moved the court to vacate the stay as Mulk is not solely a Benaras Media Works production. The Court reportedly clarified that the injunction it ordered on Monday was only against Benaras Media Works Pvt Ltd and not against Soham Rockstar Entertainment’s productions. Since there was no injunction against the Mukuts and their company, they could release Mulk as scheduled.