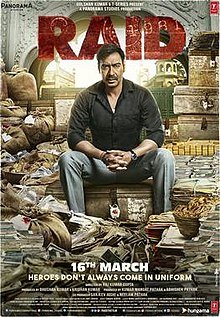 As per reports, a film financer filed a case against Ms. Neelam Kumar Mangat Pathak and others for not repaying loan taken by Ms. Pathak. The Plaintiff sought injunction on release of the film ‘Raid’ which is co-produced by Ms. Pathak. The court refrained to prevent the release of the film. However, the Court restrained Viacom 18 and Eros International Media Limited, the worldwide rights holders of ‘Raid’, from paying the proceeds of the release to co-producer Neelam Pathak. The movie has released today i.e. March 16, 2018.

Justice M. Sundar granted the interim order for a period of two weeks and ordered notices to Ms. Pathak as well as the two garnishees.

The Plaintiff claimed to have lent INR 50 lakh to Ms. Pathak in 2013 after she promised to return it within six months with interest at the rate of 30% a year. Alleging that the loan amount was not repaid on time, the plaintiff said two cheques given to the Plaintiff by Ms. Pathak bounced. The Plaintiff initiated separate proceedings against her under Section 138 of the Negotiable Instruments Act of 1881 before a metropolitan magistrate court in Chennai.

The Plaintiff filed the suit when the Plaintiff learnt about Ms. Neelam Pathak being a co-producer of the film ‘Raid’ and claimed that the Plaintiff would be left high and dry if the proceeds of the film were allowed to be taken away by the producers.

The reports state that though an interim prayer had been made to restrain the release of the movie, the Plaintiff’s counsel S. Vasudevan told the judge that he did not want to press for it since such an order would not be beneficial to anyone. He, however, insisted that the worldwide rights holders, who had been included as garnishees, should be restrained from making payments to the producers.

Accepting the plea, the judge restrained the garnishees from making the payments and also the co-producer from receiving the money for two weeks.