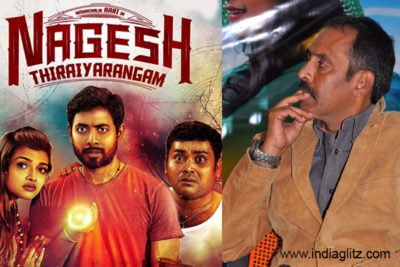 In a well-reasoned order (Read order here), the Madras High Court on Feb 14, 2018 directed the producers and the director of Tamil film “Nagesh Thiraiarangam” to clarify in all advertisements that the film had nothing to do with legendary comedian C K Nagesh or his theatre by the name.

The Plaintiff contended that the Defendants were exploiting the name ‘Nagesh’ though there were specifically directed by the Madras High Court against doing so. The Plaintiff’s grievance was that the Defendants were continuing to exploit the name ‘Nagesh’ to popularize the movie ‘Nagesh Thiraiarangam’ and apprehended that the common public would be made to believe that the film has a direct connection with the actor late C.K. Nagesh, on whom everyone has reverence much respect.

The Madras High Court had in October last year vacated an interim injunction restraining Transindia Media from using the name Nagesh Thiraiarangam. The Court had directed the producers not to use Nagesh’s name independently or exploit his popularity to promote their movie. The judge had also permitted Anandbabu to approach the court any time if it came to his notice that the producers were using the name of his father or Nagesh Theatre to promote the film.

The Plaintiff’s apprehension was that the movie contains the name ‘Nagesh’ and that the actor late C.K.Nagesh was an actor of much repute and popularity, who enjoyed immense reputation in the film industry and also among the general public. Also, that late C.K.Nagesh had a theatre and the theatre became synonymous and was actually called ‘Nagesh Theatre’. Further, the word ‘Thiraiarangam’ in Tamil is equivalent to the English word ‘Theatre’. Consequently, the Plaintiff apprehended that there would be a reasonable feeling in the mind of a common person, who perceives the name ‘Nagesh Thiraiarangam’ that it also directly or indirectly relates to the actor late C.K.Nagesh or Nagesh Theatre collectively. To prevent such an event from happening the Plaintiff filed the suit seeking damages and injunction.

The Court observed that though the Defendants had failed to comply with its earlier order wherein they were restrained from exploiting the name and theme of the actor late C.K. Nagesh for popularizing the movie “Nagesh Thiraiarangam”, the plaintiff had approached the court at the eve of the film’s release and hence balance of convenience was to be weighed. The Court observed that the Applicant has to come to the Court at the earliest immediately after coming to know the date of release of the movie. The movie is scheduled to release on Feb 16, 2018. The Court also factored the hardship which would be caused to the Defendants particularly since the Plaintiff approached the court at the last stage of the release of the film.

The Court however factored the loss of the family’s privacy of late C.K. Nagesh since the Defendant had failed to take permission to use the name ‘Nagesh’ before using it as a name of the movie “Nagesh Thiraiarangam” and hence to balance both the parties, the Court directed the Defendants to deposit a reasonable amount so that it would act as security for the Plaintiff.

The Court observed that whether damages have to be granted or not is a matter of trial.

Operative part of the order in which the Court issued directions:

“i. In all the advertisements, in any vernacular or English Newspaper, in which the film ‘Nagesh Thiraiarangam’ is advertised, simultaneously, the 2nd Respondent has also to issue an advertisement prominently mentioning that the movie is not directly or indirectly related to either the film personality C.K.Nagesh or his theatre, which was formerly called ‘Nagesh Theatre’.

ii. These explanatory advertisement notes have to be published prominently in all the Vernacular and English Newspapers wherever the advertisements of the film is being put in the public domain.

iii. The 2nd Respondent is also directed to put a scrolling display foot notes prominently stating that the movie is not directly or indirectly connected to either the actor, late C.K.Nagesh or Nagesh Theatre in all the theatres wherein the film is being exhibited.

iv. Advertisements have to be put in the Newspapers/ Magazines/ pamphlets/ any other form of advertisements immediately from morning on 14.2.2018 and simultaneous display has to be exhibited in all the theatres right from the first show of the movie and also in the television channels where advertisements for the movie are being given.

Explanatory notes have to be given in all forms of advertisements either in print or electronic mode or any other social media.

v. The Defendants are directed to deposit to the credit of the suit a sum of Rs.20,00,000/- (Rupees twenty lakhs only) on or before 2.3.2018. On such deposit, the Registry is directed to redeposit the same in any nationalised bank so that the amount could earn interest. At the conclusion of the trial, either one of the Plaintiff and the Defendants could take advantage of the deposit and the interest which accrues.”

The decision of the Madras High Court is a positive step in the development of ‘publicity rights’ of celebrities in India.

The Madras High Court had earlier in the case of Shivaji Rao Gaikwad vs. Varsha Productions, recognized the personality rights of superstar Rajnikanth and injuncted the defendants from using his names and attributes in the film and defaming him.

The Supreme Court in the Right to Privacy judgement i.e. Justice K.S Puttaswamy (Retd.) V. Union of India and ors has held that “Every individual should have a right to be able to exercise control over his/her own life and image as portrayed to the world and to control commercial use of his/her identity. This also means that an individual may be permitted to prevent others from using his image, name and other aspects of his/her personal life and identity for commercial purposes without his/her consent.”

The Delhi High Court in the case of ICC Development vs. Arvee Enterprises & anr, has held that

An individual may acquire the right of publicity by virtue of his association with an event, sport, movie, etc. However, that right does not inhere in the event in question, that made the individual famous, nor in the corporation that has brought about the organization of the event. Any effort to take away the right of publicity from the individuals, to the organiser {non-human entity} of the event would be violative of Articles 19 and 21 of the Constitution of India. No persona can be monopolised. The right of Publicity vests in an individual and he alone is entitled to profit from it.”