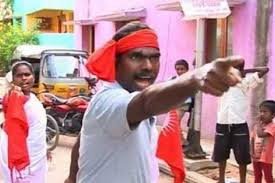 As per reports, Tamil folk singer Kovan has been arrested in Tiruchy for singing the viral Rath Yatra song slamming Prime Minister Modi and the Bharatiya Janata Party at a recent protest against the non-formation of the Cauvery Management Board.

Kovan was arrested in 2015 and charged with sedition for derogatory lyrics against then Chief Minister Jayalalithaa.

The police who entered his home on Friday arrested him after a scuffle with his friends and family, who demanded to know why he was being taken into custody.

Confirming his arrest to TNM, one police officer at the Tiruchy Cantonment police station said, “We received the complaint on April 11 from the BJP youth wing leader Gowtham. He alleges that Kovan sang at the Cauvery dispute protest in a manner that brings disrepute to the Prime Minister’s name and post.”

Kovan has been booked under Sections 153A (Promoting enmity between different groups on grounds of religion, race, etc), Section 504 (Intentional insult with intent to provoke breach of the peace) and, 505 (Whoever makes, publishes or circulates any statement whereby any person may be induced to commit an offence against the State or against the public tranquillity).

As per reports, he has been granted bail by a court in Tiruchy.

The song uploaded on Kovan’s Facebook page made a mockery of the Rath Yatra and PM Modi for the BJP’s divisive politics. Kovan and his troupe of folk singers and dancers also talk of how Modi’s slippers, much like Rama’s are ruling Tamil Nadu.

In the video, Kovan and a group of folk artists start by asking, “Where are you holding your rath yatra?” They go on to add, “This will be the last yatra for Rama rajya.”

The song went on to equate Modi rule with the rule of Rama, the hero of the epic Ramayana who is worshiped by Hindus as an avatar of Vishnu. “Rama rajya is Modi rajya, even if you are an Aryan stooge, your destruction is for sure,” the lyrics read.

In October 2015, the Tamil folk singer was arrested by the police on charges of sedition, attempt to create enmity between social groups, and sale of defamatory material. On that occasion, Kovan had taken on the Tamil Nadu government’s liquor shops – TASMAC – and made references to the then Chief Minister Jayalalithaa. His arrest was slammed by human rights organisations, social activists, political parties and student bodies at the time.