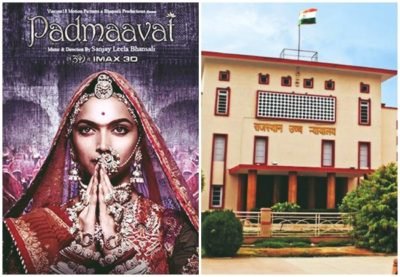 The FIR was registered by the Police Station Deedwana on the basis of a complaint filed by Virendra Singh and Nagpal Singh Rathore who had alleged that the film ‘Padmaavat’ twisted and distorted historical facts and events on ‘Maharani Padmavati’ and thereby allegedly hurt the feelings and sentiments of a section of the society to which the complainant belongs. It was further alleged that ‘Maharani Padmavati’ was a pious historical icon whose courageous act of ‘Jauhar’ was registered in the glorious annals of history of Rajasthan as well as the entire country, and thus by depicting the iconic character in songs, love scenes, etc. of the movie, the reputation and honour of ‘Maharani Padmavati’ was maligned and resultantly, feelings and sentiments of the ‘Rajput Samaj’ and entire Hindu community was hurt because of such portrayal. On the basis of the report, the FIR came to be lodged against SLB, Deepika and Ranveer under Sections 153A, 153B and 295A of the IPC and investigation commenced. Being aggrieved by the registration of the FIR, a quashing petition was filed by SLB and others under Section 482 CrPC seeking quashing of the FIR. The court had vide interim order dated March 8, 2017 (read order here) stayed further investigation of the FIR.

The Court dealt with the controversy in two parts; Firstly, with respect to allegations as set out in the FIR which was lodged prior to the film’s release in context of the offences, the court held that Section 153A of the IPC could not have been applied prior to the film being released (which is when the FIR was lodged) since there was no question of public harmony being disturbed. As regards Section 153B of the IPC, which deals with the acts, imputations and assertions which are considered to be  prejudicial to national integration, the complainant’s allegations were no more near to bringing the acts alleged within the purview of framework of the said offence. With respect to offence under Section 295A of the OPC which deals with offences relating to religion, the Court agreed with the petitioner’s arguments that Maharani Padmavati was a historical icon and was never considered to be a religious figure by either Rajput or any other community and hence Section 295A cannot be invoked.

With respect to the second issue as to whether the registration of the FIR was at all warranted at a stage when the same came to be lodged by the complainant, the Court held that a certificate issued by the Censor Board is a guarantee under law that the movie in question satisfies the requirements of law and is fit to be exhibited in public. Remedy of appeal or judicial review are available to any person, aggrieved by the certificate issued by the Censor Board. Once the Censor Board has issued the certificate of exhibition of a movie, manifestly, putting any fetters thereupon by lodging an FIR or otherwise, would amount to clear violation of fundamental right of expression guaranteed under Article 19(1)(a) of the Constitution of India. The Court referred to the Supreme Court’s judgement in the writ petition filed by Viacom 18 Media Private Limited v/s Union of India & Ors against the gag order passed by the four states [Read order here], in which the Supreme Court had held that once a certificate has been issued by the Censor Board, there is prima facie presumption that the concerned authority has taken into account all the guidelines including the possibility of any disruption of public order.

“Having objectively considered the movie in its entirety, this Court is of the firm opinion that there is not even a single scene therein which can be considered as amounting to one which can hurt the feelings of any one the count of race, caste, creed or religion. No character in the movie has been picturised in any manner which can cause disruption of public order or create enmity or hatred between any two communities. On the contrary, the grace and poise with which, the character of ‘Maharani Padmavati’ has been picturised and the respect which has been duly offered to the historical icon is nothing short of a glorious tribute and adulation.”…

“..Thus, it is manifest that persons with ulterior motives have acted in a totally irresponsible manner on basis of totally halfbaked and concocted information, while planning to disrupt the screening of the movie without any justification in total disregard to the Censor Board certification and while defying the Hon’ble Supreme Court’s directions and have thereby deprived the people of this State from viewing a glorious spectacle which gives a deep insight into the proud history of the State of Rajasthan. What should have been a cause of celebration by viewing a magnificent display of the glorious history of Rajputana culture, has been turned into an unsavory dispute arising from an unlawful and obliquely motivated step taken in utter haste.

Be that as it may. Since the Hon’ble Supreme Court has already stayed the gag order issued by the State Government and directed it to take appropriate steps for providing security to the persons interested in screening and viewing the movie, this Court directs that appropriate steps shall be taken in this regard forthwith to ensure full compliance of the said direction. The complainant and the like-minded persons who are carrying unjustified prejudice against the movie would be better advised to realise the folly of their acts.

In view of the above discussion, this Court is of the firm opinion that allowing investigation of the impugned FIR is nothing short of a gross abuse of process of law.”