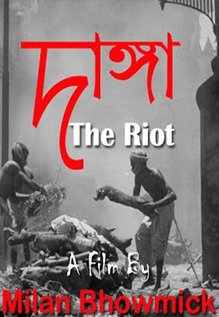 As per reports, the Calcutta High Court has permitted screening of Milan Bhowmik’s ‘Danga – The Riot’, a film based on 1946 riots in Calcutta, in the state of West Bengal.

The film explores how Syama Prasad Mookerjee saved thousands of Hindus from certain annihilation in the Muslim League-triggered riots in Calcutta in August 1946 by forcing the British administration to act against the rioters.

The Court’s order came following film director Milan Bhowmik’s petition after his movie was not allowed to screen due to alleged pressure from the Bengal administration to cinema hall owners across the state.

During hearing, Judge Shampa Sarkar said, “Why should a movie on Syama Prasad Mookerjee be banned?” Later after completion of hearing, she ordered that the movie should be released.

Milan Bhowmik has been reported to say “In Bengal, the hall owners were threatened, posters and banners were taken down to prevent the release of the movie. On May 18, we got to know that the Sub Divisional Magistrate, Uluberia, on April 27 had served an order of the 144(2) Cr PC within the sub division for maintaining public peace and tranquility. We had no other way but to move the Hon’ble High Court or restoration of right to expression and natural justice”.

As mentioned in my earlier post here, the movie was cleared by the CBFC’s Film Certification Appellate Tribunal (FCAT) and was supposed to release on April 27. The film was scheduled to be screened in 103 movie halls across the state after its release on April 27, 2018. But, Bhowmik received several calls from cinema hall owners refusing to screen his movie.