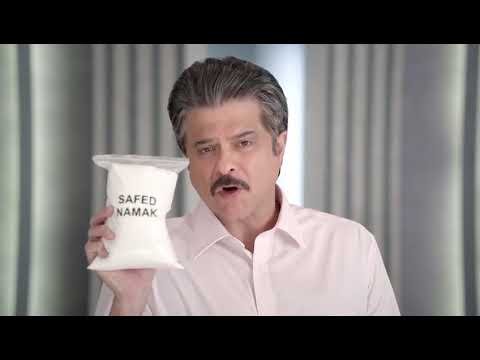 As per reports, a city civil court at Ahmedabad has granted an ex-parte interim injunction against an advertisement featuring Anil Kapoor which states that all white edible salts available in market are made in chemical factories. The advertisement can be viewed in the link here.

The suit has been filed by Indian Salt Manufacturers’ Association (ISMA), which has members like TATA and Nirma. Their objection is on the ground that the advertisement conveys the message that white salt is manufactured in chemical factories and is bleached by bleaching agents. ISMA’s advocate argued that the advertisement is false and baseless and creates a wrong impression in the minds of consumers who will feel that white salt is not good for health.

It was also contended on part of ISMA that Puro Wellness may claim that its pink salt is good for health, but it cannot assert through advertisement that white salt available in the market is bad and unhealthy. ISMA submitted, “The law established in terms of disparaging and comparative advertisements in India by various judicial pronouncements clearly show that a trader can self-puff or say that its product is good but cannot further say that the product of rivals is bad or unhealthy”.

Upon an exception being taken to “disparaging” and “denigrating” remarks against other brands in a generalized manner by a trust of various manufacturers of white coloured salt, the city civil court at Ahmedabad has restrained Puro Wellness Pvt Ltd from broadcasting on television and social media its advertisement featuring actor Anil Kapoor . Additional district judge A A Nanavati has ordered an ex-parte interim injunction on the advertisements. Further hearing on the issue has been posted on March 28, 2018.

Comparative advertising in India was initially covered by the MRTP Act, 1984 as being a potentially unfair trade practice. One of the leading case laws under the MRTP regime was the case of Reckitt & Colman Of India Ltd. vs Kiwi T.T.K. Ltd [63 (1996) DLT 29], wherein the Delhi High Court had laid down the following principles:

“1) A tradesman is entitled to declare his goods to be best in the words, even though the declaration is untrue.

2) He can also say that my goods are better than his competitors’, even though such statement is untrue.

3) For the purpose of saying that his goods are the best in the world or his goods are better than his competitors’ he can even compare the advantages of his goods over the goods of others.

The jurisprudence on comparative advertising has evolved over the years. Last year in the case of Procter & Gamble Home Products vs Hindustan Unilever Ltd  , the Delhi High Court had dismissed the suit in relation to some shampoo advertisements and held that comparative advertising, i.e. comparing own product with that of competitor’s and calling own superior/ better than competitor’s, would not amount to disparaging the goods/ products of the other. Dismissing three suits, after referring to various decisions on the law of comparative advertisement, the Delhi High Court observed that:

However, there were few other cases of comparative advertising where the courts had granted injunction on the comparative advertisements on grounds of disparagement. For instance, the Bombay and Delhi High Court had both restrained Patanjali from airing the impugned advertisements. In one of the Patanjali advertisements, the narrator urged the public to shun soaps like Lifejoy, Tears and Dhitol as they are chemical based and are used by movie stars. The Delhi High Court has granted injunction in the said case.

Last year also witnessed the landmark case of  Hindustan Unilever Limited vs Gujarat Cooperative Milk Marketing Federation Limited(Amul), where injunction was granted against Amul’s ‘real ice-cream’ against ‘frozen desserts’ advertisement which were depicted as allegedly harmful to consumers due to the presence of ‘vanaspati/ Vanaspati tel’.

THE HUL vs Amul case referred to a list of judgments which not only categorically specify as to when a product can be said to have been disparaged, but have also settled the principle of law that generic disparagement of a rival product without specifically identifying or pin pointing the rival product is equally objectionable. In other words, no one can disparage a class of products within which a complaining plaintiff falls and raise a defense that the plaintiff has not been specifically identified. Even if there is no direct reference to the product of the plaintiff and only a reference is made to the entire class of products in its generic sense, even in those circumstances disparagement is possible.

The HUL vs Amul judgement mentioned that the Procter Gamble vs HUL judgement proceeds on the wrong footing and equates malicious prosecution/ slander of goods with an action for defamation, contrary to the established principles of law.

Applying the ratio set in the HUL vs Amul case and the plethora of judgements relied in it, it appears that the injunction granted against Puro Wellness advertisement featuring Anil Kapoor will not be set aside.