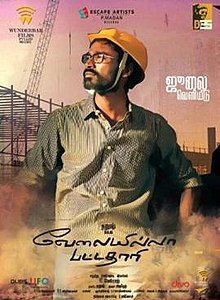 Justice C.V. Karthikeyan ex-parte decreed the suit, in favour of the Plaintiff.  The suit was filed by Wunderbar Films seeking for a permanent injunction restraining the defendants from infringing the Plaintiff’s copyright including audio and video rights in respect of the Tamil film ‘Velaiyilla Pattathari’ or VIP by remaking the same in Marathi and re-titling the same as Mahja Naav Shivaji and exploiting it further for public viewing. The plaintiff also prayed for a direction to the production house to surrender to the plaintiff company the entire stock of software, digitised master copies, master cassettes, master HD/DVD/CDs, sound recordings, literature, pamphlets and all other materials related to its movie Mahja Naav Shivaji.

The Plaintiff claimed that it had found on the internet that the Defendants under the banner of Pranitha Pawar Productions were producing a Marathi cinematography film, ‘Majha Naav Shivaji’. The 2nd Defendant (Pranita Pawar) is the Director or producer of the said Marathi film. The 3rd Defendant (Chakraborty) is also a producer and is starring as the Hero. The Plaintiff claimed that the promos, teasers, trailers, the storyline, scenes write ups, clips of songs, etc. of ‘Majha Naav Shivaji’ publicly available on the internet showed that MNS is nothing but a remake of VIP. The Plaintiff claimed the storyline to be the same as well as the songs to be copies of the songs of VIP.

The Plaintiff highlighted the similarities in the scenes between VIP and MNS as well as the songs copied from VIP by the defendants. Wunderbar Films pointed out that the hero of Mahja Naav Shivaji was portrayed as a slender, ordinary looking youngster with a stubble beard similar to Dhanush’s role in VIP. Further, there were many similarities such as the hero using a moped, sitting on the terrace along with his mother looking through a telescope and pulling out a liquor bottle from the water tank while chiding his brother. They further claimed that the tune of two popular songs of Velai Illa Pattathari beginning with the lyrics, “Udhungada Sangu…” and “What a Karuvad…” have been copied in Mahaja Naav Shivaji along with the group dance.

The judge further directed the defendants, to render true and faithful account of the profits earned by them from the movie and pay costs incurred by the plaintiff to file the present suit.

Pointing out that a legal notice issued by the plaintiff to Pranita Pawar was returned undelivered, Wunderbar said that it had nevertheless issued a public notice in local newspapers.