Everyday millions of users which include both individuals and corporations log onto their screens and would use google to look for a desired picture and ‘borrow’ the same without any reservation for both commercial and non-commercial uses. The problem arising from this, is that every image or illustration that exists on the search engine is protected by a copyright, usually owned by the artist who created the work or the photographer who took the picture. Unless a photo is part of the public domain, the companies are not allowed to use them without taking the authorization from the owner or the creator first, usually through a license. The issue, which arose, was that it became extremely difficult and tedious for the consumers to know whether an image was part of the public domain or not.

As a step to protect the creator’s rights, Google recently launched a new feature, called the ‘Licensable Badge’ which provides the users with the status of an image along with the option to license them directly from the search result. The announcement can be found here https://developers.google.com/search/docs/data-types/image-license-metadata. This step taken while is being welcomed across the globe, it has been long overdue. While Google had taken several steps to warn users from ‘borrowing’ images without proper authorization from the copyright holders, it didn’t succeed. For instance, one of the first steps taken was with the removal of the option to view the image in full size, which prompted the users to visit the source website in order to download the image. Also, since early 2018 some warnings were displayed with the search results that certain images may be subject to copyright. The licensing badge now is a small icon which appears over the thumbnail of an image which makes it clear for the consumers to know that the image can be licensed for commercial use. When the user clicks on the icon or the image, the details are further revealed with regards to the license and artist who owns the copyright.

Before the launch of this feature, users had the ability to search for images according to its usage rights. You simply had to click on the tools option and set the filters according to your preferences of size, colour, type and usage rights. It included four types of images you could filter through- ‘labelled for commercial reuse, labelled for commercial reuse with modifications, labelled for non-commercial use and non-commercial use with modifications’. The problem with this feature was that google was filtering images according to what ‘labels’ it found tagged within the image, this did not give the correct information about the ‘rights’ associated with that image to the users and would just lead to confusion.

An example of the way the old filter system did not provide enough information or sometimes with misleading information was provided by the stockphotosecrets blog. If you searched for images filtered using ‘labelled for commercial use’ tag, an image being licensed through a ‘creative commons – attribution, share-alike’ license (CC BY-SA 2.0) shows up. This entails that the image is open to commercial use but if the consumer makes any changes to the image and if they publish it anywhere then the new image will have to be published under the same license and the consumer will have to attribute the original creator. So, it would mean that if someone is designing a logo or an advertisement, they would have to allow the reuse of that logo or advert in the same way as the original image was. This information was not provided with the image itself or even on the source website. If someone made a search under ‘commercial use label’ and saw an image which was free to use and no further information was provided by the source website, then the logical conclusion would be to think that the image can be used without any extra requirements especially if the user who is searching is not familiar with the legal jargon. This system was not equipped well enough for consumers and artists to find free or paid images for professional or personal use. The filtering system was just not reliable enough for a consumer to be able to use an image without looking closely into the type of licensing agreement the artist was offering, which a lot of times would turn out to be completely different than what the user had searched for.

With the new update, for the ‘usage rights’ the drop-down filter option has been updated as well, the new menu provides only for two options, ‘Creative Commons License and Commercial and Other Licenses’. The reason which I can think of for this reduction in the number of filter options is that the information regarding the licenses is now easily accessible and, therefore, the images can be searched more extensively. It would further reduce the confusion regarding the legal jargon being used before and the number of options being offered. Now when someone would click on the license badge, they would be redirected to a webpage containing all the details related to the license.

The difference behind the intent of the two features, the licensing badge and filter search can be seen in the different problems they are trying to address. The latter is primarily used to show images which can be used free of cost while the former is intended to benefit the artists and copyright holders for them to be able to clearly lay out the licensing terms associated with the image. One is helping the users find images which can be used freely while the other is helping the artists to give the licensing deal on their terms. It is further helping users know exactly the type of deal they will be getting in if they use that image. The licensing badge is not something which will replace the filter option but they both work harmoniously together, the filter options have been streamlined because now the users can get a much more clear understanding of the type of image they are going to use because the license badge shows up directly on the image itself, so all the information regarding the license deal is available directly from the search results itself. So in a way the filter options have been streamlined to compliment the license badge.

For example, I want to use a picture of a dog for my website but with some changes made to it, so earlier I would search for an image and look for some time for the right image with the right licensing deal and for every image I might want to use I would have to go to the source website to check the terms. With this new feature let’s say I do a search under the filter ‘creative commons license’. But even with the filter applied the images can have extremely different licensing deals. The badge can be seen on the lower left of the image(above) and when I click on it, I am taken to the page with all the details regarding the terms associated with the picture(below). I don’t have to search for the terms on the source website or contact the copyright holder. 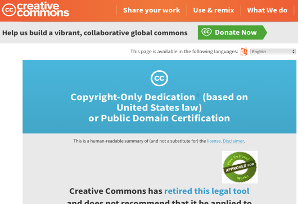 One of the problems which persists even after the launch, (this can also be because of how new this feature is) is that when you do a normal search for any topic, there are no license badges available for any image for at least the first 200-300 results, they only show up when you apply a filter to your search. The search results which do show up without the license badge might still contain a license within them and the user would have to go deep into the source of the image to retrieve the information. This issue could be because of the way images have to be embedded by the source itself and it is simply taking time for the entire image directory to implement it.

GUEST POST: MANIKA DAYAL- CHALLENGES TO AUTOMATED FILTERING: IS THERE AN...