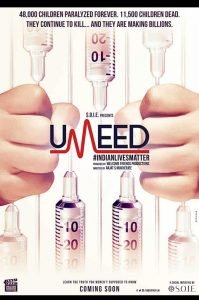 A recent judgement in the matter of Shivani Tibrewala vs. Rajat Mukherjee came as a respite to the makers of the movie ‘Umeed’ which might finally release three years post its scheduled release. This is a case that has lingered on for quite some time giving major headaches to the producers of the film ‘Umeed’ and resulted in putting on hold the release of the Defendant’s movie for almost three years. In this post we take a look at the proceedings of the case.

Facts of the Case

The suit was filed for copyright infringement where the Plaintiff alleged that the Defendant’s film “Umeed” was a substantial reproduction of the Plaintiff’s play “The Laboratory” and an altered copy of the script of a cinematographic film written by the plaintiff based on the said play and thereby violated the Plaintiff’s copyright in her literary works. Both the works have unethical clinical trials as their central theme.

In the Plaintiff’s works the protagonist “Joy” comes from a poor background and is an aspiring doctor. Her mother in order to pay for Joy’s medical college fees subjects herself to one of these unethical drug trials without the knowledge of her daughter and as a result of such a drug trial loses her life. Meanwhile Joy Volunteers to help a tsunami relief camp by disseminating drugs free of cost. She is unaware that the said drugs are also drugs which are banned abroad or are still under testing and have fatal side effects. The protagonist’s boyfriend breaks this news to her that she was being used as a pawn in the system to carry out an unethical drug trial. She also gets to know that the cause of her mother’s death was one such drug trial. It is then that with the help of her boyfriend she decides to uncover the dark underbelly of unethical clinical trials. While doing so she realises that even her mentor is hand in glove with the multinational pharmaceutical corporation indulged in such unethical drug trial. The Plaintiff’s play ends with the scene of the trial instituted by the protagonist coming up for hearing whereas the cinematographic script by the Plaintiff is dominated by court room drama which shows the protagonist and her boyfriend taking the CEO of the multinational pharmaceutical company to task and ultimately bringing him to the book.

The defendant’s film revolved around the same subject wherein the protagonist who with her sister had a happy go lucky life without any family complications. They lived in a small town and the protagonist Mia always aspires to go to a big city. When her sister, Trisha gets a job in an NGO in Mumbai, Trisha insists that their father permit Mia to come to Mumbai with her. In Mumbai, Mia’s dreams unfold and she ends up winning the Miss India contest. There is a parallel story running about the same time with intercuts about one Eliza Moore (character based on a real life journalist Zeina Awad) who is an out spoken humanitarian journalist shown to be in London and who wants to go to New York to complete her report about a white collar mafia. When Eliza is close to uncovering the malpractices of an influential and powerful US based pharmaceutical company, she and her key informants including one Dr. Bali (based on real life character, Dr. Satinath Sarangi) are murdered. One of Eliza’s well-wishers contacts a friend in FBI to investigate the matter, who finds out that the pharmaceutical company has been testing its drugs on poor Indians. Dhruv, the right hand of Dr. Bali meets the FBI’s forensic expert. He comes to know that the pharmaceutical company is sponsoring the Miss World India competition which is won by Mia. When Mia attends a camp as a part of her duties as Miss World India, Dhruv scoffs at her for being a party to a criminal act of the pharmaceutical company. This is when Mia, her sister and Dhruv get-together and battle against the powerful and rich opponent. The pharmaceutical company files a case against Mia for breach of contract which is later withdrawn by it.

On 13th October 2017 an ad interim order was passed by the court in favour of the Plaintiff restraining the Defendants from making, broadcasting, distributing and telecasting the Impugned Film.

The court observed that based on the judgements submitted before it, it was clear that in an action for copyright infringement, the Plaintiff was required to prove substantial copying of its work. The Plaintiff need not prove that the entire work is copied but that the substance or kernel of the Plaintiff’s work was copied. The court also observed that in cases such as the present one, where the subject was same, what needed to be considered was the treatment of the subject/theme, the manner in which the idea was expressed and not the idea itself. It was noted that the protectable story elements in the rival works must be considered, which did not necessarily flow from the subject/theme and which as such were unique. It was after all the quality of the work copied and not the quantity that would determine infringement of the work or a substantial part thereof.

The court relied heavily on the judgement of R.G. Anand vs. Delux Film[(1978) 4 SCC 118] and observed that based on the principles laid down in the said judgement it cannot be concluded that the Defendant’s work was a substantial copy of the Plaintiff’s script for the cinematographic film.

It noted that though both stories were based on the common theme of unethical drug testing and the malpractices followed by large pharmaceutical corporations leading to exploitation of poor and needy individuals, the treatment of the subject and the fleshing out of the story and characters was very different in the rival works. In the court’s view, the defendants were prima facie able to prove that their work was original and had been independently arrived at.

It was further observed by the honourable High Court that the balance of convenience was strongly in favour of the Defendants. The Defendant’s film had been ready for release for a long time and any continuation of ad interim reliefs would have caused grave prejudice to the Defendants, and therefore the present Notice of Motion filed by the Plaintiff was dismissed.

Though it cannot be denied that a work ought to be protected from copyright infringement, it needs to be understood that there is a need for faster remedies to decide such cases considering there are a number of economic hardships which arise for various stakeholders as a result of a movie being postponed and that too for such a long period.