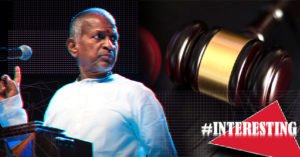 ISSUES INVOLVED IN THE DECISION:

DECISION OF THE MADRAS HC:

Before getting to rendering a decision on the questions involved, the court primarily went on to state few particular undisputed facts. These included the fact that: (para 11)

It is essential at this stage to reproduce certain provisions of the Copyright Act (as amended up to 1984):

Section 2. In this Act, unless the context otherwise requires:

(f) “cinematograph film” includes the sound track, if any, and “cinematograph” shall be construed as including any work produced· by any process analogous to cinematography;

Section 17. Subject to the provisions of this Act, the author of a work shall be the first owner of the copyright therein:

(b) subject to the provisions of clause (a), in the case of a photograph taken, or a painting or portrait drawn, or an engraving or a cinematograph film made, for valuable consideration at the instance of any person, such person shall, in the absence of any agreement to the contrary, be the first owner ·of the copyright therein;

(c) in the case of a work made in the course of the author’s employment under a contract of service or apprenticeship, to which clause (a) or clause (b) does not apply, the employer shall, in the absence of any agreement to the contrary, be the first owner of the copyright therein;

In pursuance of these provisions, the court went on to notice the presence of the term sound track in the inclusive definition of a “cinematograph film”. The author of this cinematograph film was also noticed to be “the owner of the film at the time of its completion”, which essentially is the producer of the film. (para 14 and 15). In pursuance of these interpretations, the court went on to declare that:

Further, the court also went on, in the next paragraph, to rationally justify this particular determination that – the owner of the film shall be the first owner of the musical work which is incorporated within the cinematograph film, leaving the author composer merely with moral rights. The court, passionately, stated: (Para 19)

The court has in pursuance of this “sound logic and reasoning” gone on to hold the works of the music composers, for songs composed for a film, to be a work done in pursuance of an employment of sorts, as it is the producer who invests into them to make this work exist in the first place. First ownership is generally given to the creator of the work, however the exception to this rule is the rule of employment and work for hire. Herein, by stating the work of the music composer to be firstly owned by the film producer, the court has validated a work for hire or an employer-employee relationship between the producer and the composer.

Upon such a determination, the defendant Ilaiyaraaja went on to cite the case of IPRS v. EIMPAA, specifically relying upon the footnote rendered by Justice VR Krishna Iyer wherein he stated, as a SC justice, that the film producer cannot trench the composers copyright and this recommended a legislative change in pursuance of the same. It is important to note herein that the legislature did take into account this change and introduced a proviso to section 17 through the 2012 amendment wherein the contemplation of a possibility of a work for hire relationship between the producer and the composer has been completely eliminated.

The court in this case however dismissed the application of these observations to this case, due to this merely being an obiter dictum and having no practical consequence or rather an otiose value. The court has further stated the changes or amendment which has come into being as “prospective” (really?). (Para 22)

The court also went on to rely on the Justice Balwant Singh’s part of the judgment in IPRS v. EIMPAA, wherein this determination of the relationship between the producer and the composer, as one governed under the terms of “work for hire” and “first ownership with the producer”, had been approved by his lordships, although legislatively changed later upon the recommendation of Justice Krishna Iyer. (Para 23)

In pursuance of the above-mentioned analysis, the court went on to conclude that in the absence of an agreement to the contrary, the producer of the respective films are the first owners of the copyright in the musical works and sound recordings. Hence a stake to claim copyright of the song, by the music composer shall not subsist, unless there is a contract specifying the same. (Para 25)

The court further differentiated the concepts of author and owner and stated them to have different meanings and connotations, while holding that a music composer is the author of the work but not the owner. (Para 26) This implies an interpretation that in cases of a musical work for the film, the first ownership is not equal to authorship, which it generally is unless there is a case of work-for-hire. Hence, by virtue of this determination, the court again went on to affirm its finding that the producer and the composer were in a work-for-hire arrangement, without a contract specifically providing for the same.

Another important question involved in this case was whether this suit was infructuous due to non-impleadment of the film producers who were argued to be the first owners of the work, and ultimately determined so by the court.  Even though a primary question involved in the suit was “who is the owner of the musical work – the composer or the film producer (in absence of an express assignment by the composer to the producer)?”, the court held this determination not to be conducive to impleadment of the film producer in this suit. The reasoning given by the court, as against the claim of impleadment for declaration of title, was that: (para 25)

“To sum up, in the absence of any dispute between the producer, the assignor and the plaintiff the assignee, the assignors are not a necessary party to the suit. Not impleading the assignors (producers of the feature films) is not fatal. In the absence of contract to contrary, the producers of the film are the first owners of the musical work as per Section 17 proviso (b) of the Act. Therefore, the plaintiff is the holder of the agreements assigning the copyright to exploit is entitled for the injunction relief. When no viable material for counter claim over the title is placed before the Court, cloud over the title cannot be presumed. Therefore, it is not necessary for the plaintiff to seek relief of declaration regarding title.”

Hence, again the court primarily relied upon its conclusion that due to there being a work for hire arrangement inherently, there was no need to implead the producers, unless some contractual material was provided to the contrary. The court further held that: (para 26)

“The plaintiff apprehending infringement of his copyright had filed the suit for injunction as against the defendants, who are the composer and the person alleged to have entered into an agreement with the defendant for exploiting the music work. Against the producers no relief is sought. Therefore, they are not necessary parties. Therefore, the suit is not bad for non-joinder of necessary party.”

Therefore, the court answered this question stating that there was no need for impleading the film producers or the supposed first owners in this suit for injunction.

This decision has been assailed and been accepted well by the industry, due to it being in context of a pre-1994 and pre-2012 statute, wherein work-for-hire was the scheme of interpretation according to IPRS v. EIMPAA.

Although, personally I am completely against many of the rationales appended by the court herein and will be critically examining and analysing this decision in the 2nd part of this post.