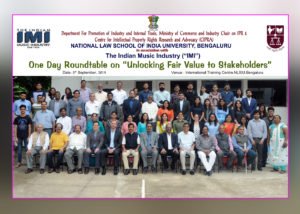 The Roundtable consisted of stakeholders from the Media and Entertainment industry in India, including esteemed experts from International Federation of the Phonographic Industry (“IFPI”), the organisation that represents the interests of the recording industry worldwide.

Mr. G.R. Raghavendra, Joint Secretary, Department of Justice, Ministry of Law & Justice, Government of India, graced the Roundtable as the Chief Guest. The welcome address was given by Professor T Ramakrishna, Professor of Law, Chair Professor (IPR), NLSIU. Mr. Lauri Rechardt, Chief Legal Officer, IFPI was the Guest of Honour of the NLSIU-IMI Roundtable. In his inaugural address, Mr. G.R. Raghavendra, gave his insights into the reasons for introduction of Statutory Licensing in India. He stated- “Statutory licensing is not a permanent phenomenon, it was only a temporary support to the industry to stand; it can be taken back “.  Mr. Blaise Fernandes set the road-map of the event by identifying the hurdles to achieving fair value for the recorded music industry in India.

Fair Value: The following information was presented by a panellist

The legitimate recorded music industry in India (Rs.1068 Cr.), powers large industries in the broader media and entertainment ecosystem, such as, the private radio industry (INR 3100 Cr.), the television industry (INR 74000 Cr.), and the digital music services (audio OTT industry) which enjoy large valuations (in billions of dollars), for example:

The lack of return on investments of the recorded music industry in India is a serious problem and ultimately a question of “fair value”.  It needs to be addressed as anything less than fair value has a negative-multiplier effect for across the value chain, from the Copyright Creators to record companies that are the main investors in the creative outputs.

The two main issues relating to fair value for the recorded music industry, were identified during discussions at the Roundtable as copyright liability rules for online intermediaries, statutory licensing and piracy.

Discussions on Statutory Licensing for sound recordings under S.31D of the Copyright Act, 1957 revolved around-

The argument that the rationale for the introduction of the statutory licence for radio and television broadcasting vide the Copyright (Amendment) Act, 2012 needs a reassessment, a decade after its introduction keeping in mind the growth in revenues of broadcasters as well as the boom in digital streaming in India.

Mr KT Ang, SVP, Public Policy Asia, Universal Music Group highlighted that copyright is a private property right, and that it is a basic but fundamental principle that it is for the owner of the private property to decide how to deal with his property – whether to make available for sale, its price, adaption for other uses, etc. Statutory licensing creates an economic environment where such a right is taken away from his hands without adequate justification.  Only if there is a market failure, for example, where the property is unreasonably withheld from the public or there’s an abuse of monopoly position should a statutory licence be considered.”

The Office Memorandum issued by the Department of Industrial Policy and Promotion (now DPIIT) sought to extend the ambit of organizations eligible for statutory licensing from “broadcasting organizations”, that is radio and TV broadcasters, to include internet operators.  The Bombay High Court has recently held in TIPS v. Wynk[viii] that the S.31D statutory license does not cover internet operators and internet usage and that DIPP (now DPIIT) did not have the power to make such interpretations. A panellist was of the opinion that the decision in Tips v. Wynk is based on an incorrect understanding of S.31D of the Copyright Act, 1957 and its scope. He also mentioned that Section 31D is broad enough to cover all forms of broadcasting and Statutory licensing satisfies the 3-Step test.

The draft Copyright (Amendment) Rules introduced by DPIIT in June 2019, proposes to substitute ‘by way of radio broadcast or television broadcast’ with ‘for each mode of broadcast’. It appears that, like the Office Memorandum, these proposed amendments seek to extend the S.31D statutory license to cover also internet operators.  Lauri Rechardt, the Chief Legal Officer, noted that such an extension of the said section would breach India’s international obligations under the WIPO “Internet Treaties” that India acceded to in 2018.  Under these Treaties, exceptions and limitations to rights or to the exercise of rights, such as statutory licenses, must be limited to certain special cases, may not conflict with the normal exploitation of the rights, and may not unreasonably prejudice the legitimate interest of the right holders.  Mr. Rechardt noted that the proposed amendments would fail each prong of this test. Additionally, the WIPO Internet Treaties also obligate India, as a contracting state, to provide an exclusive right for online transmissions under Article 8 of the WIPO Copyright Treaty (WCT) and Article 14 of WIPO Performances and Phonograms Treaty (WPPT).

Mr. Rechardt, stated in conclusion that, “look at the market, look at the tens of millions of songs available, and then question is statutory license really justified? The answer must be resounding no.  The right way is for the parties to negotiate fair, voluntary licences, even if it may sometimes take more time than resorting to statutory licenses.  Voluntary licensing is the international norm, and it sets the right foundations for a vibrant and sustainable Indian digital content market…”

With increased penetration of smartphones and cheaper data charges in India, legitimate content consumption has gone up, but at the same time there has been an increase in the consumption of pirated content online as well. Per AudienceNet – IFPI Survey, 2018, 76% of surveyed internet users accessed unlicensed content on a monthly basis in India on rogue websites. Illegal P2P apps, streaming apps, stream ripping websites or even infringing websites based out of India or Pakistan, result in losses of ~US$250 million.

Piracy continues to be a major concern and strict anti-piracy measures need to be taken to curb this menace. The fight against digital piracy involved discussion by the panel on the role of the intermediaries and anti-piracy efforts on their part to curb such piracy.

According to a panellist, “The industry needs to work with the government and the academia to build capacity measures involving tech solutions to fight piracy; it is important for the government to know that the recorded music industry has the right motivations.”

The piracy section of the roundtable looked at three broad stages in tackling music piracy. Three key points on online piracy were deliberated upon-

The panel noted that piracy is a mentality issue; people do not value content. Additionally, lack of consumer awareness of consumption of pirated content is another factor which leads to an increased piracy rate in India.

The panel also observed that India has witnessed certain positive and effective developments to tackle piracy in the form of efforts taken by the Cell for IPR Promotion and Management (CIPAM) for raising awareness against piracy, dynamic injunctions passed by the Delhi High Court and dedicated units established in different states in India such as Maharashtra Cyber Digital Crime Unit (MCDCU) and Telangana IP Crime Unit (TIPCU) to curb the menace of piracy.  However, there exists a need to have a clear policy formulated at the government level to tackle online music piracy. While framing such a policy, what needs to be considered is global best practices for tackling online piracy, such as a procedure for quick and scalable website blocking orders and the imposition of liability on online intermediaries that play an active role in the distribution of protected content online, including platforms making available user uploaded content.

In concluding remarks Mr Blaise Fernandes, CEO & President, IMI observed that, “there is no silver bullet to piracy. It is like cancer which has to be treated with chemotherapy (website blocking, injunctions) and palliative care (consumer awareness about ill effects of piracy).

In the current environment where the government likes to regulate everything, the creative industry should not encourage overregulation and protest against it. Emphasis should be made on effectively implementing the existing provisions of the Law that we have, to assure the content owners that the value of the content can be realized.

This session was chaired by Mr. T.S. Nagabharana and he highlighted the concerns of the media and entertainment industry and the copyright owners. According to him, there is an urgent need for the M&E industry to protect itself in the present era of digital dissemination of content.

According to Mr. Sankalp Dalal, Director Legal, Zee Music, “there are many new ways of distributing content, and because of these new modes of exploitation available, there are limitless possibilities for the content to reach the users. So, it is high time that content distribution be rightly channelized to ensure optimum returns for the copyright owners”. Ms. Priti Deshpande, Director Legal, Universal Music Group India, brought up the issue of the change in the culture of viewership, which according to her is now more individual centric and not community centric, as it used to be in the past. This is also one of the factors which contributed to the growth of viewership of creative content.

The panel also highlighted that online platforms like YouTube and Facebook are the new-age distributors of content; the creative community, be it a label, producer, TV channel or singer, have a responsibility to ensure that such platforms which aggregate content, do not hide behind archaic laws, unsuitable for the current environment.

Mr. Nagabharana, in his concluding remarks, stated that the artists are selfless individuals, they are sensitive people, they perform for others to enjoy the content and the law should pro-actively protect the rights and interests of the authors and content owners.

In the concluding session, Justice N. Kumar, former Judge, Karnataka High Court, opined that the Judges have to interpret statutes in accordance with the four corners of law and according to the golden rule of interpretation of statutes, if the words used in the section are clear or unambiguous and if they have no absurdity, the Judge should give effect to those words and there is no question of interpretation at all. He also suggested that for the law to be effective, first, there should be a proper law in place along with a sound understanding of the law among the enforcement agencies, including the person who decides on that law or the person who administers the law. For piracy, our laws are exhaustive and strong enough, there is just a need of implementing it in letter and in spirit.

[Report published ‘as is’ as provided by NLSIU]