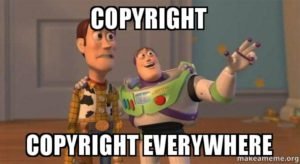 This article is co-authored by Harshil Dureja [Contributor, IPRMENTLAW and a fifth year student from GLC Mumbai].

The present article is in two parts, the first part explicates the issue in case and discusses the copyrightablity of Sherlock Holmes’ feelings. The second part highlights the notion of copyright misuse as contended by the Defendant and discusses some of notable incidents.

The famous (cliché too) aphorism of copyright law: ideas are not protected but expressions are, has attracted a new debate over the all-time adonis sleuth- Sherlock Holmes. The Conon Doyle estate (IP owners of Sherlock Holmes character) sued Netflix along with Pictures Production LLC, Nancy Springer, and others over the released movie Enola Holmes alleging the unauthorized copying of original creative expression by Sir Arthur Conan Doyle’s (actual creator of Sherlock Holmes) copyrighted Sherlock Holmes stories.

Conan Doyle created (the characters of ) ‘Sherlock Holmes’ and ‘Dr. John Watson’ in his 1887 novel “A Study in Scarlet” (now in the public domain). Interestingly, there is a slight noticeable story behind Sherlock Holmes’ character in the stories written before and after World War I (“WW”). When Conan Doyle lost his brother and son in WW I and started writing novels post-war, he created significant new character traits for Holmes and Watson in his last ten stories, written during 1923-1927. The works published before 1923 are in the public domain, whereas the copyright protection on works written post-1923 will end between December 31, 2018 and December 31, 2022, depending on the date of publication. Here comes the twist: pre-1923, Sherlock was portrayed as aloof and unemotional (often known as a brain without heart), however, later his character is shown developing human connection and empathy and being capable of friendship, expressing emotions, and respecting women.

The plaintiff Doyle Estate alleged copyright infringement by the upcoming TV series which is said to be based on the novel “Enola Holmes Mysteries” of Nancy Springer. The Doyle Estate alleged that Springer used Sherlock Holmes, Dr. Watson, and other characters, settings, plots and story elements from both the public domain and Copyrighted Stories in her novels. Specifically (astonishingly too), the plaintiff claimed the copyright on Conan Doyle’s transformation of Holmes from cold and critical to warm, respectful, and kind in his relationships. (Note: Springer published the books almost more than 15 years ago, and the estate showed no problem then).

The present article discusses the copyrightability of a characteristic trait and deliberates on whether the particular feelings (empathy, love for dogs, respect for women) of Sherlock Holmes which are part of copyrighted protected work of Doyle Estate. The authors have also highlighted the concept of “copyright misuse” as alleged by defendants against the plaintiff. Besides, the plaintiff also alleged the infringement of trademark, however the article is only limited to copyright law.

Like most other copyright cases, originality is again a bedevilled question in this case. Though there aren’t any specific and crystalized definition of ‘original’ however, the judicial pronouncements have helped courts adjudicating the cases. In the present case, the originality claim is on the feelings of the fictional characters which are generally not the subject matter of copyright. However, there have been cases (such as by Nichols v. Universal Pictures Corporation, Walt Disney Productions v. Air Pirates, Olson v National Broadcasting Co.; Halicki Films, LLC v Sanderson Sales & Marketing; Rice v. Fox Broadcasting Co.; Toho Co., Ltd. v. William Morrow & Co.; Metro-Goldwyn-Mayer, Inc. v. Am. Honda Motor Co.) which have clarified that characters can get copyright protection. Importantly, in Walt Disney Productions v. Air Pirates, the Court held that comic book characters, which have “physical as well as conceptual qualities”, are copyrightable. Thus, Sherlock Holmes can be protected under copyright law.

In the present matter, the plaintiff did not ask for the protection of fictional characters since they are already in the public domain, rather, copyright was claimed on the feelings/traits (empathy, compassion, etc.) developed in Sherlock, post-1923 stories. The impugned characteristics traits of Holmes- empathy and respect for women are mere ideas (regardless of how creative they are) and general (expected too) behavioural traits of an individual (categorized as respect trait and emotion trait by the defendants.) If these traits are protected by copyright law, then no one else will able to use them in their work which indelibly questions the fundamental tenet of copyright law.

In this case, the plaintiff does not directly claim a right on Holmes but indirectly gimmicked to protect it by claiming the right on the feelings. If the Court protects such traits of Holmes, it has to be extend the protection to Sherlock Holmes as well, because these traits in isolation cannot be protected. Reliance can be placed on Silverman v. CBS Inc. where the Court has held that “when a story falls into the public domain, story elements including characters covered by the expired copyright become fair game for follow-on authors”. Hence, when Sherlock Holmes came to public domain, its traits, elements and other relevant features also ceased to have copyright protection.

In this way, protecting the feelings of Sherlock would indirectly extend the copyright protection to something which is already in public domain. The similar was negatively answered in another litigation against Doyle Estate by Leslie Klinger (Klinger v. Conan Doyle Estate) where the Court perused on whether copyright protection of a fictional character can be extended beyond the expiration of the copyright on it because the author altered the character in subsequent work. The Court clarified that “a copyright affords protection only for original works of authorship and, consequently, copyrights in derivative works secure protection only for the incremental additions of originality contributed by the authors of the derivative works.”

Applying the same in the present matter shows that the claimed incremental additions of originality are the general feelings: respect for woman and empathy for the co-worker/friend, which are too general to get the protection of copyright. It is established that copyright is given on the (creative) expressions and not on the creative ideas. Relying on Blehm v. Jacobs, it is imperative to separate unprotectable ideas from the expression because copyright law only protects a particularized expression of an idea, which apparently cannot be the feelings of kindness, warmth, and respect.

Likewise, in Daniels v. Walt Disney Co, deliberating upon the copyrightability of character “The Moodsters”, the Court held that the ‘idea’ of an emotion can be copyrighted. In Campbell v. Walt Disney Co. also, the Court held that cocky and self-reliance attitude cannot be protected under copyright law. Notably, in order to prove the infringement, the plaintiff has to prove that defendants have totally copied the development of the character i.e. Sherlock and not merely the broader outlines (Smith v. Weinstein). But, in this case, such a comparison would not favour the Plaintiff because its claim can only be on the particular traits and not on characters in general. Hence, the total comparison would not be helpful for the plaintiff.

Relevancy should also be drawn from Hogan v. DC Comics wherein the Court observed that “In determining whether characters are similar, a court looks at the totality of [the characters’] attributes and traits as well as the extent to which the defendants’ characters capture the total concept and feel of figures in [the plaintiff’s work].” In the present matter, the Defendants have not used the total characteristic and elements of Doyle’s works, rather, they developed a new story on the previous work. In arguendo, if even they use, it would be set off by the work in the public domain and be compared with the remaining work i.e. respect and emotion traits, which again are not protectable.

Given these cases, there is a serious doubt on the validity of Plaintiff’s claims. It reminds one of Justice Scalia who, in Dastar Corp. v. Twentieth Century Fox, said that allowing these types of restrictions on a public domain work could effectively create “a species of mutant copyright law” that would limit the public’s right to copy and use expired copyrights. Hence, it won’t a gaffe to say that Doyle Estate’s copyright infringement claim is merely an exercise of copyright misuse.

On a separate note (interested readers may also read the reply by Defendants Here from Page 9), some Sherlock fandom has notified that the Estate’s claims of the development of certain feelings in the final works are amusingly false. Illustratively, calling the “respect women” emotion incorrect, Ryan Britt in his article “Den of Geek,” cited “The Man With the Twisted Lip” (1891), in which Holmes remarked, “I have seen too much not to know that the impression of a woman may be more valuable than the conclusion of an analytical reasoned.” Similarly, the defendants’ lawyers have pointed certain instances where Holmes had shown shown these emotions.