The Ministry of Defence(MOD) recently vide an advisory letter dated July 27, 2020 addressed to CBFC advised that in view of some production houses making films on Army theme and using comments distorting the image of the Indian Army, producers of movies/ web series, etc. based on Army theme may be advised to obtain the NOC from MOD before telecast of any movie / documentary on Army theme in public domain. Further, any incident which distorts the image of Defence Forces or hurts their sentiments may be prevented.

The letter has further been copied to MEITY, I&B Ministry ad ADG PI. 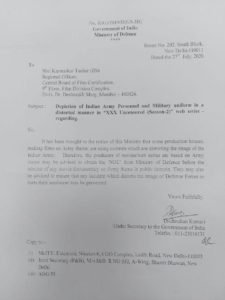 The Advisory Letter does not seem to have a binding effect in any manner. It is however unclear as to why the Defense Ministry addressed the letter to CBFC in relation to web-series in addition to films when CBFC has no power to regulate / certify content on OTT platforms.

Further the language of the letter is extremely broad, vague and subjective. As per industry sources, when films are made on Army themes/ based on Army, NOC from the Ministry of Defence is always sought and submitted to the CBFC. However, that seems to be more of an industry practice than a legislative requirement. The detailed guidelines for submission of proposal to Army Headquarter/Ministry of Defence seeking assistance for Army in connection with making of film/TV serial/ documentary etc. can be viewed here.

Last year, the MOD issued a similar letter to ASCI (Advertising Standards Council of India) in relation of depiction of Army uniform in advertisements. View here.

Content regulation of films (under Cinematograph Act) and television content falls under the domain of the I&B Ministry, whereas OTT falls under the purview of MEITY and is currently unregulated. It would have to be seen whether these Ministries take any action in furtherance of the advisory letter issued by MOD.

While respecting the Army is quintessential, the question is if such NOC is required from the Ministry of Defense, would such requirements also be for Airforce, Police, Navy and similar institutions?

One may argue that depiction of reality on screen is a fundamental right of free speech and expression. The restrictions of the nature proposed in the advisory letter would be beyond the scope of the reasonable restrictions present under Article 19(2) of the Constitution and therefore any such mandatory requirement (if any) would be falling foul of Article 19(1)(a) of the Constitution.

It would have to be seen if the I&B Ministry or MEITY act upon the advisory letter of the MOD. 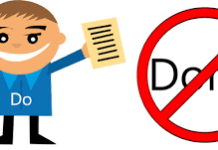 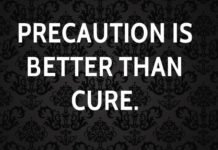 PRECAUTIONS TO BE TAKEN WHILE MAKING AN AUDIO-VISUAL CONTENT: PART 1- TRADEMARK AND COPYRIGHT 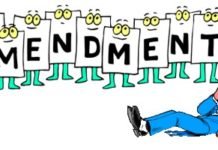