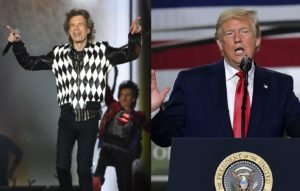 The US has recently seen a surge in cases wherein artists and musicians belonging to various bands have come out against the use of their content by Donald Trump in his political rallies. There have been instances of where Tom Petty’s estate had issued a cease and desist order after the use of their song “I won’t back down”, Neil young threatened to sue Trump after the use of his song “Rockin’ in the Free World”, Rihanna called out Trump for playing her popular hit song “Don’t Stop the Music”, and most recently Rolling Stones have threatened to sue the same “supreme” leader for the unauthorized use of their song “You can’t always get what you want” (one of my favs!!!) in his rally at Tulsa, in spite of several cease and desist letters being issued against the same. Interestingly, this is not the first time that Donald Trump has been threatened on similar grounds by the Rolling Stones. In 2017 as well, the publicist of The Rolling Stones had explicitly stated that the Rolling Stones have requested the cease of all use of their content in Trump’s political campaigns. The song used then was “Start me up” and this was vehemently opposed. [Check here for more instances where bands and songwriters have opposed politicians from using their musical works.]

In this article, I shall be discussing the issues of Copyrights and Moral rights associated with such uses and shall evaluate the policy prerogative around the same.

Firstly from the perspective of the United States, authors/composers barely retain public performance rights to their works. Further, even if they do, these rights are licensed by PRO agencies like ASCAP and BMI, which issue blanket licenses to venues on behalf of these artists. In campaign rallies, it is the venue which seeks licenses from ASCAP and BMI and these organisations do not refuse upon such licenses. Further, even in the case of record labels holding these rights, by virtue of assignments, these impersonal corporations do not stop the venues or even the political parties seeking a license, due to the prospect of earning a royalty involved. The utilitarian-impersonal nature of American Copyright law is imperative to be highlighted herein. Hence, it is generally easy for campaigners to use music, especially for rallies, and get a license (either through a label/ publisher or a blanket one from the PRO) for the same in the American jurisdiction.

Further, ASCAP further issues licenses directly to event organisers/ campaign organisers to obtain licenses which extend across venues and throughout the campaign duration.

The important point herein is the lack of control in the hands of the musicians, in the sense of an autonomy in utilizing this work.

A question herein is whether such an autonomy is even required?

THE QUESTION OF TRANSFORMATIVE USAGE

Campaigns involve political speech which brings in an imperative question of the need to balance copyright protection with Free Speech and fair use concerns. In the United States, it has specifically been held in Buckley v. Valeo (424 US 1, 14 (1976) that political expression and speech used during a campaign for public office would have broad First Amendment protections, unless it is false or misleading. Whether the use of a musical work in a campaign can be held to be misleading, (in the sense of establishing an association of the artist with the politician) is a vague contention, which may be evaluated by the court, but in my prima facie opinion it doesn’t really cause “misleading”.

Further, merely to substantiate, it is imperative to discuss the case of Keep Thomson v. Citizen for Gallen Com., wherein, the Federal District court of New Hampshire, clearly went on to rule that the exclusive right of the copyright holder must be weighed in sufficiently against the public interest of dissemination of information affecting universal concern. Here as well, a 15 second sample of song used in a campaign by the plaintiff was used for the purpose of a political message. This was held to come under the ambit of transformative use due to free speech implications of restraining the dissemination of such essential political speech, as well due to it being non-commercial per se. However, in a contrary view, in Henley v. DeVore, the US circuit court held such political speech to be infringing due to the “profits generated out of the use through increased publicity and campaign donations”. This, according to me is a false extension of the concept of commercial use, as the link/nexus between the use of the musical work with the increased publicity or donations, is a far-fetched one and does not seem to be reasonable.

An essential question that arises although is what constitutes political speech? Does every song being played at a campaign rally constitute political speech/ comment? I don’t think so. Unless, there exists a dialogue which the use seeks to provoke, or a message (parodic or explicit) which it conveys, it seems improbable for the ground of political speech/ transformative free speech to subsist.

WHY OPPOSE? WHAT IS THE REMEDY?

Generally, when the artists/ composers/ bands refuse or protest the use of their music/ content in political campaigns, they do not do so due to economic reasons but rather due to their personal viewpoints about the politician, their political inclinations, and the question of association which such use implicates. This non-economic integrity and autonomy of association – right does not find a legal resort in the United States. The American jurisdiction confines itself to economic justifications of intellectual property, the monolithic construct of which has been widely criticized by academics. With the exception of the Visual Artists Rights Acts (only in the state of California), discussed in detail on the blog here, there exists no statutory mechanism which deals with the personhood and autonomy rights of artists, with respect to their works. Specifically in the case of musical works, there is no “integrity” or internationally recognised Moral Rights (Article 6bis of the Berne Convention) which find recognition in the US. So where can the musician go? Do they have a legal resort? Well, ASCAP states that a few legal mechanisms may be available for artists, however these are yet to be legally tested in courts, and do possess overlap and free speech issues. These are:

The problem with these last two remedies is that most of the jurisprudence points towards an action only when there is commercial exploitation, as against a non-commercial use in a political campaign.

In such situations, involving political usage of music, as against for mere entertainment purposes, it is essential that the Kantian justifications of intellectual property find place and an autonomy is extended to artists in jurisdictions of this sort, where a provision of moral rights does not explicitly hold value. A solution which has recently been propounded and endorsed by PRO’s especially BMI is creating a Political Entities license which allows the songwriter/ publisher therein to pull a work from the license per request. Although this may have a post-facto application, it protects the catalogue from further being exploited in the most feasible way. This goes against the normative belief that once the artist licenses their music to the PRO, they essentially lose their voice to decide who can play their music. An exception could be allowed to allow for such autonomy, due to the strength of political associations and the proximate impact on personhood that such use implicates. For such a provision to be made even more efficient, it is essential that intermediation of such a right is not permitted and not even publishers, but only the songwriters get a direct say and a right to revoke a license.

EXPLORING THE INDIAN MORAL RIGHTS REGIME FOR AN AUTONOMOUS REFUSAL

Coming to the Indian Jurisdiction, fortunately, we do have an effective moral rights regime which helps tackle such issues in favors of artists, against flawed political associations or more simply, autonomy of political association and personhood concerns with the content created. Even if the composers have assigned copyright, being the authors of their works, they have moral rights (of paternity and integrity) under Section 57 of the Act. The right to integrity refers to the right against distortion, mutilation or modification, which would be prejudicial to the author’s honor or reputation. However, the catch herein lies in the none of these words actually connoting association, due to the high threshold of establishing an “objective” harm to reputation. (See here and here for more)

The WIPO Guide to the Berne Convention might just offer some interpretational respite herein. This interpretational guide to the Berne Convention clearly provides, in clause 6bis 5, that the right to integrity can be equated to the “right to respect”, which authorizes the author to demand curb on uses which alter the basic message of the work. It provides the author, subjective autonomy to decide whether the use ruined their reputation or not.

It has also been argued  that use of “honor” implies more than meaning a mere objective determination of reputation. It implies the author’s subjective autonomous interpretation, i.e., their own feeling about treatment of their work, being directly linked with personal autonomy and freedom of expression.

The right to integrity in authored works principally finds its place in sovereignty and control over the process of creating and communicating intellectual works, as well as justifies the facets of autonomy, truth and democracy. This right preserves the author’s autonomy of association in their work and preserves will as an implicitly essential element of free speech. In other jurisdictions, espousing a moral rights regime, such as Canada, the harm to “honor and reputation” has been held to be subjectively determined by the author, although within reasonable limits.

Although, I believe autonomy is a limited right and must not curb the flow of diverse expression and the importance of a creative corpus in the society. Autonomy is a limited right, even within the norm of free speech, and must be exercised only when the use is non-transformative or outside the concerns of fairness. Hence, in my opinion, to efficiently allow for such a broad connotation of the right to integrity to survive (which in fact is essential due to the personhood justifications of Moral rights), a balance must be struck with free speech concerns. Therefore, fair dealing principles or the 3 step test of nature, purpose and character of use jurisprudentially developed under section 52, could be extended to moral rights – to ensure protection from unauthorized use which goes against artistic autonomy and honor of the artist, and at the same time to ensure a fair balance with the freedom of the public to use the work, under the justification of freedom of speech.