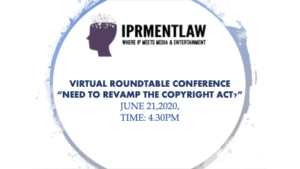 I am delighted to announce  that we at IPRMENTLAW are conducting for the first time ever, the biggest virtual roundtable conference on June 21, 2020 at 4.30pm on the occasion of the Copyright Amendment Act, 2012 completing eight years, topic being ‘Need to revamp the Copyright Act?’.

In 2010, I had just started out my career in a law firm after graduating from my law school. The Copyright Amendment Bill, 2010 was introduced just around then and it shook the entire industry. As a fresher, I was intrigued with what the Amendment Bill proposed to amend and super confused as well. I wondered, why such confusing language to such simple intentions? Two years passed by with stakeholder meetings, Standing Committee Report, representations being made by each side and then eventually on June 21, 2012 the Copyright Amendment Act came into effect. It took the entire legal fraternity a while to make sense of the Amendment. Each sector in the media and entertainment industry started revising its agreements be it author agreements, performer agreements or assignment agreements, to ensure compliance with the 2012 Amendment or to find ways to circumvent it.  There was a chaos with each sector trying to interpret the Amendment in its favour owing to ambiguity in some of the provisions. Around six to seven constitutional challenges were filed challenging several provisions of the Amendment- by the labels, producers, broadcasters, etc.  Gross transparency issues of copyright societies came into light, investigations took place and rest is history. We had an Amendment Act but no amendment rules until March of 2013. No Copyright Board to enforce several of the provisions. Confusing judgements rendering the intent of the Amendment redundant. Attempts to broaden the scope of the Act by Rules without amending the Act itself. Multiple licensing windows creating havoc for the users. Publishing industry bleeding as an aftermath of some convoluted interpretations of some judgements by some users. Eight years down the line, we are still struggling with the same issues.

So why this virtual roundtable conference?

It’s a hope for a change, a hope to start the process to bring about a change.

This conference intends to have an open discussion on the issues faced by different sectors and address the question on whether it is high time that the Copyright Act, 1957 undergoes a complete revamp.

We know that the 2012 Amendment had its heart in the right place, but has it been able to achieve its objective?

For the first time ever, a diversified and stellar range of speakers would be coming together to speak on an issue of such significance.

If you have thoughts, you would like to share or queries on the topic under discussion feel free to write to me at  anushreerauta@iprmentlaw.com and we would endeavor to address it in the webinar. Look forward to an activate participation from the industry and the legal fraternity. This is your one chance to be a part of the process to bring about a change you want to see.