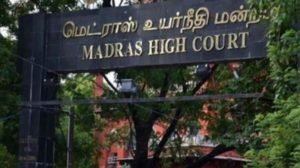 In a 146-pager judgement, the Madras High Court on March 2, 2018 decided on the dispute between Star India Private Limited, Vijay Television against TRAI and others [Read Judgement here] wherein Chief Justice Indira Banerjee rendered the dissenting decision in favour of TRAI having exercised its powers within jurisdiction however holding that the clause putting cap of 15% to the discount on the MRP of a bouquet as arbitrary.

In view of the split verdict, the writ petitions would be placed before a third judge. As reported by Indiantelevision.com, now that the high court has delivered a fractured verdict, raising fears of a status quo and non-implementation of the TRAI tariff guidelines in certain sections of the cable distribution industry, the Supreme Court could, likely on Monday, take a view whether TRAI can go ahead and implement regulations or further judicial clarity is needed.

Issue in brief: The petitioners’ main challenge was that the jurisdiction of TRAI is to regulate and fix tariff limited to carriage or ‘means of transmission’ and it cannot be extended to ‘content’ which is governed under the Copyright Act, 1957 i.e. TRAI can regulate ‘carriage’ but not ‘content’.

The amended prayer of the petition read as under:

“to issue of Writ of Declaration or any other Writ, order or direction in the nature of a Writ of Declaration holding and declaring that the Provisions of the Telecommunication (Broadcasting and Cable) Services Interconnection (Addressable Systems) Regulations, 2017 notified on 03.03.2017 and the Telecommunication (Broadcasting and Cable) Services (Eighth) (Addressable Systems) Tariff Order, 2017 notified on 03.03.2017 to the extent that they have the effect of regulating, determining or otherwise impacting content creation, generation, exploitation, licensing and terms and conditions for exploitation of content and broadcast reproduction rights and in particular,

are unconstitutional and ultra vires the provisions of the TRAI Act, 1997 inasmuch as they are beyond the scope of the jurisdiction of TRAI conferred under the TRAI Act, 1997 and consequently quash the same and pass such other Writ, order or direction as the Court may deem fit in the interest of justice in the circumstances of the case….”

When asked by the Court to identify the clauses which according to the petitioners have the effect of regulating, determining or otherwise impacting content creation, generation, exploitation, licensing and terms and conditions for exploitation of content and broadcast reproduction rights, senior counsel Mr. P. Chindambaram appearing for the petitioners, gave the following seven clauses in the Interconnection Regulations and eleven clauses in the Tariff Order which he deemed would be appropriate to determine the constitutional validity and vires of these clauses in all.

Key Submissions of the petitioners:

Union of India submitted that TRAI is a specialized statutory body created under the statute and when it has come up with said regulations and said tariff order after detailed consultation and when TRAI emphatically says that said regulations and said tariff order have been made in public interest, the same should not be allowed to be assailed in writ petitions impelled by business interest of writ petitioners.

With respect to the objection on territorial jurisdiction and alternative remedy of appeal to TDSAT, the Court overruled the same for two reasons; one being that the impugned clauses are part of subordinate legislation made by a statutory body in exercise of its subordinate legislation under the TRAI Act. Territorial jurisdiction does not come in the way when constitutional validity and vires of central enactments are assailed. Secondly, technical objection is preliminary in nature and the writ petitions have been taken up for final disposal.

With respect to the plea that the writ petitions are liable to be dismissed as being hit by res judicata, the Court noted that in cases of this nature, doctrine of res judicata and constructive res judicata are not to be applied strictly to proceedings under Articles 226 and 32 of the COI. The Court also pointed out that the Star India vs TRAI judgement by the Delhi High Court was dated 9.7.2007 which was prior to the Copyright Amendment Act, 2012 and there were several submissions which were not available to the petitioners before the Delhi High Court then. Referring to the chart, writ petitioners contended that the content of their programmes are produced at huge costs or are acquired at huge cost and submitted that unless they are permitted to price their television channels depending on the content, it would not be viable and they may not be able to survive in the industry.

TRAI contended that BRR comes into existence only when signal beamed by broadcasters (writ petitioners in the instant case) reaches the STBs of the end users and there is no BRR prior to that.

The Court observed that a close examination of impugned clauses in said regulations and said tariff order was that TRAI has not fixed any upper limit or cap for the writ petitioners in pricing their channels. Further more, TRAI has left it to the discretion of writ petitioners or similarly placed broadcasters to declare any particular channel as a pay channel. In other words, it is open to writ petitioners and other similarly placed broadcasters to declare any of their channels either as pay channel or as free to air (FTA) channel and only when the particular pay channel is put in a bouquet, it cannot be priced at more than Rs.19/- per month per subscriber.

While a plethora of judgements were relied on by each party, heavy reliance was placed on the Supreme Court’s decision in the matter of Cellular Operators Association of India and others Vs. Telecom Regulatory Authority of India and others [(2016) 7 SCC 703] (also popularly known as the ‘Call Drop Case’) to contend that the power under TRAI Act is non delegable and legislative in nature

Relevant extracts of the decision given by Justice M. Sunder:

It is common knowledge that the cost of production or cost of procuring various programmes will vary depending on artist, producer, nature of production and many other determinants. Therefore, TRAI while in one breath says that they are not regulating content, in the same breath compels the broadcaster to sell a channel at a particular price in a bouquet and is placing a cap on the price knowing fully well that the cost of content in many cases can be very high and far above the cap fixed by TRAI. Therefore, interalia, by this very simple illustration and analogy of bouquet of roses, we have no hesitation in coming to the conclusion that the impugned provisions of regulations before us have the effect of impacting and regulating content of broadcasters and as alluded to supra, it is the stated position of TRAI that they do not intend to and cannot regulate content.

The value of a programme in terms of its content can be determined only by the Copyright Board. The intention of the Parliament is clear and parliamentary wisdom in this regard is evident from the fact that barely a few weeks prior to the amendment to Copyright Act on 21.06.2012, the rules under the Cable Television Networks (Regulation) Act, 1995 (7 of 1995) were completely overhauled. We have no reason to believe that Parliament would not have noticed / taken into account overhauling of aforesaid Rules, while amending the Copyright Act. When these two are read in juxtaposition, it is very clear that while content of a programme and its value is governed by the Copyright Act and more particularly regulated by the Copyright Board under the Act, carriage or in other words, ‘means of transmission’ is governed by TRAI Act and is regulated by TRAI.

Chief Justice Indira Banerjee dissented with Justice M. Sunder’s view that the provisions of the impugned Regulation and Tariff Order are not in conformity with the TRAI Act. In her view these provisions neither touch upon the content of programmes of broadcasters, nor liable to be struck down. However, she was in agreement that the clause putting cap of 15% to the discount on the MRP of a bouquet is arbitrary and not enforceable.

In the Chief Justice’s view, the amendments in the Copyright Act, have nothing to do with the inter se relationship between the broadcaster and the distributor in the activity of broadcast. It also does not deal with the price of a channel that an end consumer pays to the broadcaster. These provisions, after amendment, deal only with the broadcaster’s relationship with holders/owners of copyright/performer’s rights in the individual programme, which is re-broadcasted or reproduced. The impugned Regulations and/or the impugned Tariff Orders operate in a different sphere unconnected with Broadcast Reproduction Rights, governed by the Copyright Act.

Referring to Justice Sunder’s reliance on the Call Drop case, the Chief Justice observed that the Regulation impugned in the aforesaid case was not struck down on the ground of absence of transparency, but on the ground of manifest arbitrariness, as call drops attracted penalty on service providers even though they conformed to the quality standards laid down by the Quality of Service Regulations 2009, and such penalty did not advance the avowed object of the Regulation impugned, of quality control. The Supreme Court disagreed with findings of transparency arrived at by the High Court. While the Supreme Court was dealing with the same Regulation making power in the same statute, the Regulation impugned was different. A judgment rendered in the context of a different Regulation does not operate as a binding precedent in the case, where we are deciding inter alia validity of the impugned Regulation and the impugned Tariff Order.