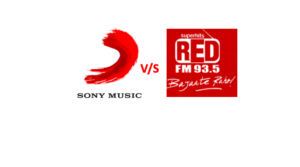 In a copyright infringement suit filed by Sony Music, Bombay High Court has granted an ad-interim injunction in favour of Sony Music against KAL Radio thereby restraining them from broadcasting / communicating the content of Sony Music (Indian and International repertoire) on its FM radio stations, without complying the provisions of Section 31-D of the Copyright Act and the Rules framed thereunder. The ad interim injunction shall continue until 2nd July 2021. Read order here.

Several radio broadcasters had filed applications before the Intellectual Property Appellate Board (“IPAB”), now disbanded, seeking statutory licenses under Section 31-D read with Rule 31 of the Copyright Rules 2013. On 31st December 2020, the IPAB determined the radio royalty rates and the payment mechanism for statutory licensing for FM radio broadcast. There are various challenges against the IPAB order pending before the Delhi High Court.

There were email correspondences exchanged between the parties wherein KAL Radio sought for details of Sony Music’s copyright protected work and thereafter sent a notice purportedly under Section 31-D read with Rule 29 of the Copyright Rules 2013, claiming an entitlement to a statutory license and forwarding a cheque of a certain amount. Sony Music responded to the notice contending that the amount in the cheque was quantified without basis and was bereft of the details that Section 31-D contemplated and thereby returned the cheque calling upon KAL Radio to comply with the Rules.

Sony Music thereafter witnessed that KAL Radio had broadcasted its content which was later admitted by KAL Radio in the royalty calculation and log file submitted by it.

In a well-reasoned order, Justice Gautam Patel held that KAL Radio does not even have a statutory license and cannot show that it is compliant with Section 31D and Rule 29. He observed that demonstrably, at the prima facie stage, its notice is non-compliant.

Justice Patel further noted that the first notice sent by KAL Radio did not have the names of the programmes in which the copyright protected works are to be included, nor the details of time-slots, durations and period of programmes in which the works are to be included which are a mandatory requirement under Rule 29. He observed that KAL Radio has only said that the works for which it seeks a statutory license ‘will be used in various radio programmes’. It does not specify how it has computed the advance.

While disagreeing with the Defendant’s arguments, he noted that KAL Radio cannot decide which part of the Rules it wants to apply and which it does not and simply discard those Rules that it finds inconvenient. In opposition to Sony India’s copyright infringement civil action, it cannot mount a challenge to the validity of the Rules or seek that these be read in any manner other than what their plain language and meaning demand.

Justice Patel while acknowledging that expropriatory provisions like Section 31 D need to be strictly interpreted observed “Prima facie, the entire scheme of Sections 31 to 31-D is a departure for the general principles in copyright law in regard to licensing. These provisions force the grant of licenses under various conditions. Generally, copyright licensing is a matter of contractual volition in an arms’ length transaction. A copyright-owner may assign his or her copyright in whole or in part, or may license it subject to agreed conditions. Section 31-D on the other hand, for instance, compels a copyright owner to grant a license, and the statutory regime itself sets out the terms and conditions. Section 31- D therefore deprives a copyright-owner of the freedom of choice in licensing. That is a deprivation of a species of property. For that reason, such statutory licensing is rigidly controlled by statute.Prima facie, it must follow, therefore, that the provisions of Section 31-D must receive a strict construction and there can be no room for a liberal or more free-wheeling interpretation…”

He further observed that if the Defendant’s submissions are to be accepted it would drive a coach and four through the entire edifice of the Copyright Act and one might as well do away with all copyright protection and that the Defendant’s arguments in effect mean that they need not conform to the statutory regime, and none can deny the defendant a ‘right’ to use someone else’s copyright-protected material.

While granting the ad-interim injunction, he noted the following:

While similar infringement suits have been filed by other music labels like T Series and Saregama which are pending before the Delhi High Court, the Bombay High Court decision is one of the first ad-interim injunction orders against a radio broadcaster post the statutory licensing order of IPAB being passed.