“The Internet never sleeps; and the internet never forgets”. This statement appositely describes the presence of Internet in our lives and the characteristics that it portrays. Posting things on the Internet gives access of it to people all around the world in no time. This characteristic of Internet has its own pros and cons. The con being that when certain illegal or offending content is posted on the Internet, by the time it is brought down, already a lot of people have had access to that content. Moreover, since Internet is so wide there are certain technological impediments faced by the responsible authorities to entirely efface such content from the Internet. Recently, a single judge bench of the Delhi High Court in ‘X’ v. Union of India and Ors. while dealing with similar issues passed an order to provide answers as to what would be the implementable and effective directions that could be issued by a Court so as to remove certain content from the world-wide-web found to be illegal or offending and ought to be removed.

The Petitioner ‘X’ came before the Court with the principal grievance that the photos that she had posted on her “private” Instagram and Facebook accounts were taken without her knowledge or consent and had been unlawfully posted on a pornographic website. The contention of the Petitioner was that even though her photos were otherwise unobjectionable, the petitioner’s photographs became offensive by association and by placing the said photographs on the pornographic website, the respondents had committed the offence of publishing and transmitting material that appeals to the prurient interests of the public, an offence under Section 67 of the Information Technology Act, 2000 (the ‘IT Act’).

Template Directions issued by the Court

To address the above-mentioned queries, the Court needed to examine the current statutory landscape of our country, the technological limitations and impediments faced and also how such matters are addressed in other jurisdictions. Therefore, the Court appointed Amicus Curiae to assist it in the matter. On considering the submissions made by the learned Amicus Curiae and analyzing the overall application of the current legal aspects regarding unlawful online content, the Court concluded that with the recent enactment of the Information Technology (Intermediary Guidelines and Digital Media Ethics Code) Rules, 2021 (‘2021 Rules’), the earlier Intermediary Rules, 2011 have been suppressed. Consequently, the Central government has sharpened and expanded various aspects of the liabilities and obligations that intermediaries have to deal with unlawful content.

Further the Court issued certain template directions which would be implementable, effective and would enable meaningful compliance of the orders of the Court. The set of directions included:

Problems with these Directions

First, it has to be considered that whether a search engine will come under the ambit of social media intermediary. According to Rule 2(1)(w) of the 2021 Rules, a social media intermediary is an intermediary whose primary aim is to enable interaction between two or more users and allows them to share create upload, disseminate or access information using its services. There are various search engines available, however since Google has over 86% of the market share among all the search engines, illustration of Google will be appropriate. Google does not have the primary aim to enable interaction between two or more users. It merely allows access to information and it does that by allowing its users to search on its website and google itself displays the results of the search. Thus, it cannot be said to be a social media intermediary. Since it is not a social media intermediary, it is not important to scrutinize the second condition. Also, it cannot fall under the ambit of SSMI as the conditions mentioned above are not fulfilled.

The Court in this case concluded that the Central government has sharpened and expanded various aspects of the liabilities and obligations that intermediaries have to deal with unlawful content. The Court through its directions shed some light on the recently enacted 2021 Rules and how they can be adopted to overcome the barriers in removing the unlawful content from the world-wide-web. However, with its direction, certain issues have been raised, that whether a search engine can be called as a ‘social media intermediary’? Interestingly, Google has recently filed an appeal against this decision before the Delhi High Court pleading that they cannot be called a ‘social media intermediary’. Thus, it has to be seen what shall be the answer to this question. 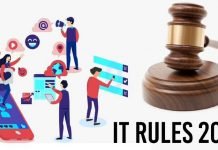 AN INTRICATE REVIEW OF THE DRAFT INFORMATION TECHNOLOGY AMENDMENT RULES