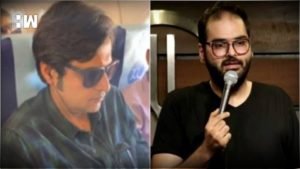 You’d probably be living under a rock if you haven’t heard of or seen the whole episode where Kunal Kamra has been banned by several airlines from flying with them after he posted a video of Arnab Goswami in an Indigo flight asking him to answer some of his questions and commenting on his style of journalism.

Kunal Kamra, a stand up comedian popularly known for his podcast on YouTube ‘Shut Up Ya Kunal’ and also known to have called out the government on several occasions in the past uploaded a video on instagram about a couple of weeks ago where he can be seen questioning Arnab Goswami on his style of journalism in an Indigo flight. After the video went viral, there was a whole debate on twitter with people taking sides on whether Kunal Karma’s actions were appropriate or not. Soon after there was a tweet by Indigo airlines saying it has decided to suspend Kamra from flying with them for six months. This tweet was thereafter retweeted by Mr. Harshdeep Singh Puri (Civil Aviation Minister of India) advising ‘other airlines to impose similar restrictions on the person concerned’ after which several other airlines too, including Air India banned Kunal Kamra from flying with them. This sparked a nation wide debate as to whether a ban imposed in such a manner on a passenger is lawful and rightfully imposed or not. Kunal Kamra then on 31st January 2020 sent a legal notice to IndiGo airlines asking them to revoke the ban so imposed, to tender an unconditional apology and to pay a compensation of Rs. 25,00,000/- on account of the mental pain and agony suffered by him.

Now whether the actions of Mr. Kamra were right or wrong is a subjective question but let’s have a look on what exactly is the law under which a person can be restricted from flying with an airline.

Laws under which people can be banned from flying

The ‘No Flying List’ was introduced under the DGCA guidelines in 2017 under its Part IV, Series M, Section 3 of the Civil Aviation Requirements which deals with ‘Handling of unruly/ disruptive passengers.’

According to the guidelines, Airlines shall categorise all cases of unruly behaviour into following categories with a ban as indicated in the table below:

b) A representative from a different scheduled Airline as Member.

What is interesting to see here is that this is one of the few instances in India where a person has been banned by an airline and also that in Kunal Kamra’s case, no official complaint was filed by the passenger concerned i.e Mr. Goswami. Furthermore there was no official committee which was formed to look into Kunal Kamra’s behaviour before banning him. Another question which arises is whether the advisory given by the civil aviation minister to ban a person without conducting an enquiry on the same was within the well defined principles of law.

It would be a case first of its kind if this goes to court and various questions of law would be answered including certain aspects of right to freedom of speech since in the Legal notice, Kamra said that it was in exercise of his right to freedom of speech and expression as enshrined in Article 19(1)(a) of the Constitution that he sought to indulge in a conversation with a fellow passenger.