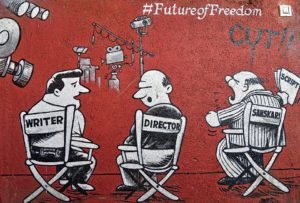 Recently the Karnataka High Court in the matter of Padmanabh Shankar vs Union of India & Ors, vide its judgement dated August 7, 2019 ruled that online content cannot be regulated under the Cinematograph Act. Read judgement here.

The issue before the court was whether the transmission or broadcast of any films, cinemas or serials and other multimedia content through the internet will come within the definition of ‘cinematograph’ under clause (c) of Section 2 of the Cinematograph Act, 1952?

The Petitioner, Mr. Padmanabh Shankar, a public spirited person concerned with the unrestricted broadcasting of films, cinema, serials and other multimedia content via Internet, made the major online video streaming platforms such as Netflix, Alt Balaji and Youtube amongst others as Respondents to the Public Interest Litigation (PIL).

The Petitioner’s main grievance was as under:

The Petitioner sought from the Court to bring online content under the ambit of Cinematograph Act, 1952 and also to set up an authority to sanction the content so broadcasted through the Respondent platforms. The Petitioner also sought a relief that till an authority is constituted, the CBFC should be certifying authority for all online content to be broadcasted on internet and a direction to the video streaming platforms for obtaining a certificate from the CBFC before broadcasting/transmitting content.

The Court, after considering the submissions made by the parties and on perusal of the relevant provisions observed as under:

The Court thus held that transmission or broadcasting of films serials, etc. through internet will not come under the purview of Cinematograph Act, 1952 and declined the prayer sought by the Petitioner. However, the Court mentioned that it is open for the Petitioner to make representation to the appropriate legislative authorities for the same.

The Court further observed “As far as the guidelines placed on the Code for Self- Regulation of Online Curated Content Providers are concerned, we must note that the same do not create any enforceable right in favour of citizens and therefore, the same do not prevent the State from considering what safeguards and what regulations within the four corners of law can be provided as regards the grievance made by the petitioner”.

Interestingly, despite the judgement passed by the Karnataka High Court, the I&B Ministry has again invited suggestions on whether online content should fall within the purview of the Cinematograph Act.

Firstly, the I&B Ministry does not have any jurisdiction to call for such suggestions. As reported by Medianama here, in response to a RTI application, the I&B Ministry categorically said that they do not have the power to censor any content online, and that they are “not pursuing the creation of a regulatory framework” that would allow them to have any online censorship powers. I had covered a post here on content regulation on OTT Platforms.

Secondly, Ministry is struggling with even getting an amendment done to the Cinematograph Act for films. Despite the Justice Mudgal Committee report followed by Shyam Benegal report, no amendments have seen the light of the day. The inconsistent manner of functioning of CBFC (being sanskari on and off as per its whims and fancies) is also not unknown. Getting a body like CBFC to regulate online content which is non-linear (viewer has control !) would be taking 10 steps backwards. And let’s not forget, India is the fastest growing entertainment and media market globally (this is not me saying, PWC report says it). Remove the freedom of showing the content the platforms show globally and you would be left with the same old television content (Not sure if the global platforms would then be interested investing the way they are). That does not mean that platforms should abuse the freedom they have enjoyed so far. They need to show content with some responsibility and need to take self-regulation a bit more seriously if they wish to avoid another sanskari board watching over them.