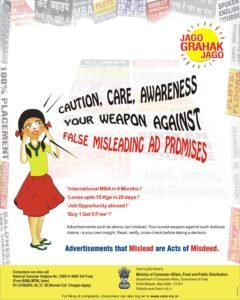 The Consumer Protection Bill, 2018 was introduced in the Lok Sabha on December 23, 2017. The objective of the Consumer Protection Bill, 2018 is to provide for protection of the interests of consumers and for the said purpose, to establish authorities for timely and effective administration and settlement of consumers’ disputes and for matters connected therewith or incidental thereto.

Post Nestle India’s controversy wherein Maggi noodles was banned by the Food Safety and Standards Authority of India (FSSAI), questions were raised with respect to the liability of its past and present brand ambassadors such as Madhuri Dixit, Preity Zinta, Amitabh Bachchan. This led to a lot of debate on liability of celebrities for misleading advertisements. The Consumer Protection Bill, 2015 which was originally proposed, prescribed imprisonment as one of the penalties for endorsers in case of misleading advertisements. The Bill drew a lot of flak from media which is probably why the imprisonment penalty has now been removed in the 2018 Bill.

(1) Where the Central Authority is satisfied after investigation that any advertisement is false or misleading and is prejudicial to the interest of any consumer or is in contravention of consumer rights, it may, by order, issue directions to the concerned trader or manufacturer or endorser or advertiser or publisher, as the case may be, to discontinue such advertisement or to modify the same in such manner and within such time as may be specified in that order.

(4) Where the Central Authority is satisfied after investigation that any person is found to publish, or is a party to the publication of, a misleading advertisement, it may impose on such person a penalty which may extend to ten lakh rupees.

(5) No endorser shall be liable to a penalty under sub-sections (2) and (3) if he has exercised due diligence to verify the veracity of the claims made in the advertisement regarding the product or service being endorsed by him.

Section 2 (18) defines endorsement”, in relation to an advertisement, means— (i) any message, verbal statement, demonstration; or (ii) depiction of the name, signature, likeness or other identifiable personal characteristics of an individual; or (iii) depiction of the name or seal of any institution or organisation, which makes the consumer to believe that it reflects the opinion, finding or experience of the person making such endorsement;

The Bill however stipulates that endorsers can escape liability if they have exercised due diligence to verify the veracity of the claims made in the advertisement regarding the product or service being endorsed by him. The Bill does not indicate as to what steps taken by endorsers would be construed as due diligence. Celebrities can certainly not be expected to run lab tests on their own or get into the intricacies of the manufacturing, distribution and marketing of products.

In this regard, it would be pertinent to note that The Advertising Standards Council of India (ASCI) provides for a mechanism for taking ASCI Advice which can be viewed at the following link https://www.ascionline.org/images/pdf/advertising-advice.pdf. Further, the ASCI has released guidelines for celebrity endorsers which can be viewed at the following link: https://ascionline.org/images/pdf/guidelines-for-celebrities-in-advertising.pdf . These Guidelines provide that if the Celebrity either directly or through the concerned Advertiser/Agency chooses to seek Advertising Advice from ASCI on whether the advertisement potentially violates any provisions of the ASCI code or not and if the Advertisement is developed fully following the Advertising Advice provided by the ASCI, then the Celebrity would be considered as having completed due diligence.

The Advertising Standards Council of India is a self-regulatory organization for the advertising industry to promote, maintain, monitor and uphold fair, sound, ethical and healthy principles and practices of advertising for the protection of interest of consumers and the general public. Established in 1985, ASCI’s role has been acclaimed by various Government agencies. In 2017 in the case of Common Cause (A Regd Society) v Union of India and Ors, Supreme Court affirmed and recognized the self-regulatory mechanism put in place for advertising content by ASCI.

There have been few cases in which courts in India have held that ASCI is not a statutory regulator and cannot usurp / arrogate itself the powers of restricting the telecast of any advertisement or infomercial [Ref: M/s. Teleshop Teleshopping v/s The Advertising Standards Council of India & another].  However, the Ministry of Information and Broadcasting vide its Advisory dated August 21, 2014 has stated that non-compliance of ASCI’s Code of self-regulation in advertising (“Advertising Code”) is a violation of Rule 7(9) of the under Cable Television Network Rules, 1994. Rule 7(9) provides that no advertisement which violates the Code for self-regulation in advertising, as adopted by the Advertising Standard Council of India (ASCI), Mumbai for public exhibition in India, from time to time, shall be carried in the cable service. Further, the Delhi High Court in the case of Metro Tyres Ltd vs ASCI [CS(COMM) 1484/2016] has also upheld the jurisdiction of ASCI.  Hence, ASCI’s decisions are bound to be complied by advertisers and the advertisements which are found to be violative by ASCI cannot be carried out on cable service / TV Channels.

In view of the proposed penalties on endorsers under the Consumer Protection Bill, 2018 it would be prudent for celebrities to seek ASCI Advisory on their endorsements to safeguard themselves and absolve themselves from liability.

The Celebrity may thus himself/ herself obtain or require the brand / talent management agency to obtain such ASCI Advisory on behalf of the Celebrity. Further, adequate representations must be taken from the brand to ensure that the endorsement materials would be in accordance with applicable laws, there would be no misleading advertisements. An acknowledgement should be taken that the celebrity has no way of ascertaining and verifying the products and would be relying on the representations of the brand. Further, that the Celebrity has no control on the manufacture, sale, distribution and advertising of the products of the brand and therefore would not be responsible for any claims in relation to the products.