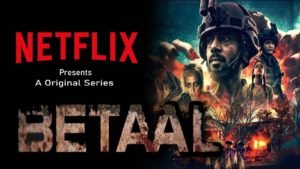 The Bombay High Court vide its order dated May 22, 2020 refused to grant any ad-interim reliefs to the plaintiffs Sameer Wadekar and Mahesh Gosavi in their copyright infringement claim against Netflix, Red Chillies, director and writer  of the Series, where the plaintiffs claimed that the web series infringed their screenplay ‘Vetaal’ which was intended as a Marathi feature film for which they had acquired a copyright registration in 2015 and which they had registered with the Screenwriters’ Association in March 2018. Read order here.

The Plaintiff claimed that he came upon a YouTube video which was sent to him by a friend one Pratik Meshram which is when plaintiff was convinced that in the 146 seconds of Youtube video of a web series titled BETAAL, it was a copy of plaintiff’s copyright. The Plaintiff further claimed that he found at least 13 similarities in this 146 second trailer of the web series. The Plaintiff alleged that the Defendants have depicted in many different manners plaintiff’s work but the defendants’ projection is similar to copyright of plaintiff.

When asked by the court as to how would the Defendants particularly the author of the series have known about the story of the Plaintiff, the Plaintiff informed the court that he had shared his work with many known producers out of which one Wilson Louis had few contacts in Netflix.

The Court rejected the ad-interim reliefs on the following grounds:

Betaal is an upcoming Indian fictional horror web television series based in a remote village that serves as the battleground between British Indian Army officer Betaal, his battalion of zombie redcoats, and the Indian police. The series is written & directed by Patrick Graham and co-directed by Nikhil Mahajan. The series produced by Red Chillies Entertainment and would be streaming on Netflix from May 24, 2020.

The order unfortunately fails to disclose details of the similarities alleged by the Plaintiffs in the suit to ascertain whether the Plaintiff was claiming similarities only in the idea or the detailed treatment. In any case, it would not have been possible for the Plaintiffs to know the entire treatment of the story merely on the basis of the trailer.

This is not the first instance in which such cases have been filed by writers at the eve of the content’s release. Courts have in almost all such cases ruled in favour of the defendants except where the Plaintiffs have been able to establish breach of confidentiality.

Here it a timeline of few such similar cases:

The Supreme court had laid down the cardinal principles of copyright infringement in the matter of RG Anand vs Deluxe Films:

As can be seen from the timeline above, film production houses and platforms are prone to such kind of claims where some individuals claim to have sent a copy of their script to the producers. While courts have not entertained such matters in the past, it is important that the production houses/platforms/ studios have some strict procedures in place for acceptance of scripts from unknown parties. Release letters, rejection emails, etc. are some methods of resolving this menace. From a writers’ perspective, it is not advisable to randomly share your script copy. Sign proper non-disclosure agreements before sharing your script to any other party.