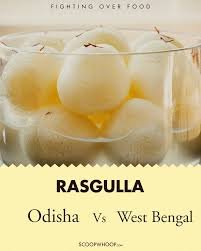 Two months after the Chennai-based Intellectual Property Office reached a conclusion that the “rasgulla” had its geographical origin in West Bengal, a trust based in Jajpur district and another individual moved a PIL in the Orissa High Court, seeking a direction to the authority concerned to withdraw the tag from West Bengal.

The petitioners — Punya Utkal Trust and Santosh Kumar Sahoo of Jankia in Khurda district — also urged the High Court to direct the Odisha government to stake claim to the GI tag for Rasagola as the famous sweet had its origin in the State.

“The sweet is also associated with the Jagannath culture and is being offered as prasad to the Trinity for over 400 years now,” the petition said.

The petitioners assailed the “inaction” of the State of Odisha in taking needful steps for applying and obtaining GI registration of Rasagola as per the Geographical Indications of Goods (Registration and Protection) Act of 1999.

A Geographical Indication, or ‘GI’, is a name or sign used on certain products indicating certain qualities, characteristics or reputation which are essentially attributable to its geographical origin. As per the Geographical Indications of Goods (Registration and Protection) Act (‘Act’), 1999, a GI is defined as “an indication which identifies such goods as agricultural goods, natural goods or manufactured goods as originating, or manufactured in the territory of a country, or a region or locality in that territory, where a given quality, reputation or other characteristic of such goods is essentially attributable to its geographical origin”.  The Act also requires that the good in question, if it is a manufactured good, should be produced, processed or prepared in the designated area.

Some other products from India to get the tag include Darjeeling tea, Madhubani paintings, Kashmir pashmina and Nagpur oranges, etc.

The Directorate of Food Processing Industry of West Bengal had applied (number 533) on September 8, 2015 seeking the GI status for Banglar Rasogolla. After due procedure (examination, objections, hearing, opposition and appeal), the same was published in the GI Journal No 99 on July 14, 2017. The GI tag was finally conferred on November 14, 2017.

The tussle between the two states escalated in June 2015, after Odisha’s science and technology minister Pradip Kumar Panigrahi set up committees to trace the origin of the dish. They even went a step further to declare 30th July as ‘Rasagolla Dibasa’ to celebrate its origin.

As per reports, the West Bengal government then decided to fight this claim legally and provided evidence that the dessert was, in fact, created by renowned sweet-maker Nabin Chandra Das in 1868.

It was, claimed by the priests of Jagannath Temple, Puri, that Rasgulla originated from the temple, where it is a part of the religious rituals, and has been a part of the same since the 12th century.