The Indian Music Industry (IMI) conducted its inaugural dialogue ‘The Indian Music Convention 2018’ on August 22, 2018. IMI has published its report on the said convention which can be accessed here.

The Convention saw participation from various stakeholders of the Indian recorded music industry. Several important topics were discussed at the convention, key topics being on the issue of value gap, fair value to creators, combating digital piracy, price regulation and control, issues in relation to Section 31 D among others.

Anti- Piracy: One of IMI’s big agendas is to work closely with the government and its agencies and various institutions, to bring as much of the money leakage into the legitimate market.

While speaking about the fair value issue, Mr. Subramaniam highlighted that the legitimate music industry, which is about Rs.850 Cr., powers some giant industries including radio, television, live music business, device and equipment sales.This $130 million industry powers an outside industry to the extent of nearly $2 billion. But those industries pay less than 2%-3% towards the use of music which has caused a fair value issue.

While talking about the discrepancy in the value chain, Mr. Subramaniam pointed out that the Jio-Saavn merger, valued at a billion dollars or Rs.7000 Cr. is a four-year-old entity. An entity like Radio Mirchi is valued at Rs.3300 Cr., whereas a company like Saregama, which probably controls the maximum historic value of music, after the turnaround and after the success of Carvaan is valued at Rs.1000 Cr.

While taking a dig at the statutory and compulsory licensing provisions, he said “This is vastly unfair and there is a huge amount of discrepancy in where the value lies. These same large companies lobby with the government and insist on statutory and compulsory license provisions, to further diminish our value. The recent notification about whether statutory licenses are applicable on internet companies, is worrying. My plea to the Ministry, is that their help is needed. We are the creative industry, who invest in talent and artists. We take the risk, keeping the culture of music alive. It is we, who need protection and not so much those high value users. This is to give us some balance so that we can work and compete in a relatively equal manner.”

While talking about the reforms in PPL, Mr. Thakur highlighted five key parameters with which PPL is mandated.

“The first is to engage all users and clients. The second is membership expansion to make PPL an inclusive body. The third parameter is technology upgrades and future readiness. The fourth is global integration, while the fifth parameter is healthy governance, compliance and transparency.”

Mr. Kwee Tianh Ang gave some interesting figures on India’s ranking in the global market. He said that in terms of rankings, India is ranked 19th in terms of the total market, in physical terms it’s ranking is 31st and it is 14th in terms of digital, which is not too bad. Performance rights are not so good since India is ranked 32nd. Sync rights, representing the strength of the music industry in India, is higher than normal. But compared to the sync market in the United States, India is grossly underperforming in terms of the amount of royalties the music industry can extract for the use of music in movies. The digital is growing and has doubled since 2014, and now represents 78% of total Indian music revenues. In physical terms, India has fallen by a third, from USD 30 million to USD 9 million. Public performance rights collections have also dropped substantially, from over USD 20 million down to just slightly over USD 10 million. The sync revenues are at USD 7.7 million.

With respect to Section 31 D, he stated the following

“With regard to Section 31D; it was introduced to give license to the broadcasters without needing to secure a permission, they just need to pay royalties. An interpretation of Section 31D came out in 2016, which extends the license to include all forms of digital usage. We are pleased to hear about India’s accession to the WCT and WPPT. Under these treaties, an exclusive making available right is required. If India continues to apply the Section 31D interpretation, it would run foul of obligations under international treaties. IFPI is happy to work with the Indian Government to iron out this issue and ensure that particular online interactive transmissions are not subject to a compulsory license.”

Shri Hoshiyar Singh emphasized on the need of consultative process with users while fixing tariff scheme of societies. He stated:

“Authors and owners of content expect fair remuneration for their work when exploited by the public at large. This compensation depends on the tariff, the willingness of the clients to pay and the collection efficiency of the society. The tariff scheme fixed by the society must be just, reasonable and should aim to maximise the availability of the work to the public. All those who use music for commercial and professional purposes should be treated as members of copyright societies, i.e., as clients and not as users.

It has been observed that such clients are not generally consulted during the fixing of tariff. It is therefore suggested, that the clients should receive an opportunity for active participation during tariff fixing. During the process of calculating royalties, the rationale for the decision and the information used to make the decision should be clear and made available, at least to the clients and the members of the society. The distribution royalties to authors and the owners of the copyright work should be based on the principle of equality of treatment of all the members”.

Shri. Sushil Satpute spoke about the various activities taken by the Government including working on national IPR policy, accession to WCT and WPPT, issue of piracy and steps being taken to curb it.

In context of Section 31D, Shri Satpute said the following:

“Since copyright industries have raised section 31D, I want to share that we have initiated an industry consultation, prior to coming out with such a Government office memorandum (OM). There is no new addition in the law or creation of any new provisions in the law. Government office memorandums (OMs) are not law, they are simply a clarification, which is done because it was requested by some people. The OM states that the definitions of broadcast and communication to public in the Copyright Act does not restrict internet as a medium where protection can be sought. Hence, this particular OM should not be seen as a restrictive one. However, if there are issues; and we have been receiving representations on this particular OM, we are willing to discuss this further. We can have meetings and discussions here, or in DIPP in Delhi to further deliberate on this issue. I can assure that whenever there is a demand from the (music) industry and since copyright is now with the Department of Industry Promotion and Policy, we are open to any suggestions that can help the Indian music industry grow.”

Mr. Rajat Kakar enlightened the conference with the reforms being brought about in PPL including an impeccable corporate governance, improved copyright governance, engaging PricewaterhouseCoopers (PwC) as statutory auditors, appointing Ernst and Young (E&Y) as internal auditors, revamp of PPL’s constitution, hiring a new head of licensing, CTO, getting a former judge as an independent director, new regional managers, increase in regional interactions.

He also announced that PPL would be focusing on its core business i.e. public performance and radio licensing. With PPL’s exit from TV, mobile and online processing, the impetus is on the music labels to focus on the physical, digital and television aspects themselves.

Mr. Rakesh Nigam spoke on developments that have taken place in IPRS and changes being brought about in IPRS.

He informed that IPRS has been re-inducted into CISAC –this will be formalised in October and that IPRS has complied with new articles suggested by CISAC.

Alongside performing rights, IPRS will also administer mechanical rights, and collect the author’s share of royalty for synchronisation rights. IPRS will also collect royalties on behalf of authors that are not members of the organisation.

From April 1st (2019), IPRS will not take cash because of rumors that people misuse cash. Members can apply online and take a license. They can visit the website, apply, pay the license fee and the license will be generated for them on the spot.

A panel moderated by Mr. Ameet Datta, Partner, Saikrishna & Associates  with panelist Eric Baptiste, Chair of the Board, CISAC and CEO, SOCAN and Kwee Tiang Ang Regional Director (Asia Pacific), IFPI spoke on how can Indian Collective Management Organizations adhere to global best practices and what are the lessons from CISAC and IFPI. The panel included issues on

Collection Societies Panel: Where is the money?

The panel discussed on the challenges faced by copyright society, roadmap to encourage rights owners to register with IPRS and PPL (India) and users to license from these societies.

Challenges faced by the societies. People challenge the rights of societies and question the legitimacy of the society, using it as a pretext to avoid dues. Further:

Other issues such as representation of smaller and regional labels in IPRS, PPL’s transparency and compliance issues, online proceduers to address some of the problems, etc were also discussed.

In 2012, China was behind India in the global music market. It is now, a Rs. 2000 Cr. ($292M) market while India is only a Rs. 850 Cr. market. China was able to transform into a major music market since it brought down piracy from 99% in 2010 to less than 38% (in 2018) and moved to a subscription based economy. The panel discussed the shift in China’s position in the global music market; it’s growth as a subscription based economy; and the lessons that can be leveraged by India on the basis of this model.

The C-Suite Panel examined the various difficulties of India’s music industry such as piracy, low public performance collections, non-commensurate remuneration by derivative industries such as the radio industry and India’s performance relative to the performance of leading music economies globally.

This panel discussed on the issues faced by regional music labels,  issue of fair value, role and need for independent regional labels.

The general consensus was that it is possible for India to be among the top 10 music markets by 2022. 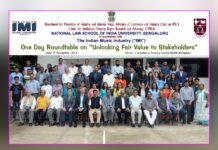